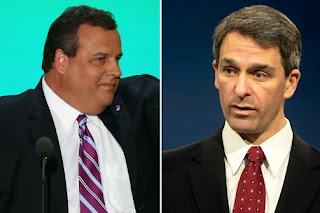 Ken Cuccinelli may be the darling of the spittle flecked Christofascists who want a Christian theocracy in Virginia and the knuckle draggers of the Tea Party, but the recent polling suggests that Cuccinelli - or Kookinelli, as I prefer to call him - isn't gaining need traction among moderates and independents to win in November (I hope this trend continues).  In stark contrast, Republican Chris Christie appears headed towards a landslide reelection in New Jersey.  Some suggest that Kookinelli should learn a thing or two from Christie.  I would argue that such a transformation is impossible for Kookinelli, especially given his documented record of extremism.  A piece in The Daily Beast looks at the night and day differences between the two GOP candidates.  Here are highlights:

Chris Christie and Ken Cuccinelli are both New Jersey natives, Republicans, and their party’s gubernatorial nominee in their respective states. Beyond that, they share little else.


Christie, the governor of New Jersey, is a moderate conservative cruising to reelection; Cuccinelli, currently the attorney general of Virginia, is the darling of the GOP base and not much more. Christie has a double-digit lead over his Democratic challenger, State Senator Barbara Buono; Cuccinelli is down by about five points to former Democratic National Committee Chair, Clinton crony, and alleged grifter Terry McAuliffe, according to the latest pair of polls.

Christie’s strength in the reliably blue Garden State and Cuccinelli’s weakness in the Old Dominion are about persona, policy, and political reality. Christie knows that he’s the governor of a state that has consistently gone for Democratic presidential candidates over the last two decades. On the other hand, Cuccinelli fantasizes that Virginia voted for John McCain and Mitt Romney, and that ethnic-slurring George Allen made it to the Senate.

But Cuccinelli’s problems go deeper than that. Right now, he is underperforming even Romney’s showing in Virginia. Romney lost the state, but still managed to win its upscale voters and white women—Cuccinelli is losing both blocs to McAuliffe.

Cuccinelli owned stock in Star Scientific, the very same company whose chief, Jonnie Williams, showered both McDonnell and Cuccinelli with gifts—gifts that Cuccinelli has refused to return in kind or in cash. In all, only $18,000 or so is involved, and yet Cuccinelli cannot find it in himself to cut a check. Not surprisingly, McAuliffe hammers away on this sore point, leaving Cuccinelli trailing and the story festering.


More worrisome for Republicans is Cuccinelli’s incapability of eliding over hot-button social issues. As Virginia’s outgoing Republican Lt. Governor Bill Bolling sees it, Cuccinelli is a “rigid ideologue who thrives on conflict and confrontation and tends to be drawn to the more controversial and divisive issues of the day.”

Christie, meanwhile, is tradition-minded but not mired in debates over ultrasound wands or sodomy. He flatly stated that sexual orientation is a matter of biological predisposition.  . . . . He hasn’t dabbled with birtherism, in contrast to Cuccinelli.

Christie is of the modern world; Cuccinelli less so. For Republicans in Virginia and nationally, that is a problem. As one Republican White House veteran and Virginian put it, “the race is between a crook and a kook, and I expect the crook to win.”


Sadly for Cuccinelli, while voters may say “ugh” about “the Macker,” they have yet to walk away from him. Much as Cuccinelli may try to talk about taxes and roads, not enough voters are buying. A well-funded McAuliffe ad blitz is cementing an image of Virginia’s attorney general as fixated on social issues.

Cuccinelli’s struggle is compounded by the fact that Virginia’s demographics dramatically shifted, making it emblematic of the New South. Indeed, nothing tells the story better than a recent Quinnipiac Poll showing Hillary with comfortable leads over Christie and Texas Sen. Ted Cruz in a hypothetical 2016 presidential matchup. She polls ahead of Christie by nine, and crushes Cruz by almost 20 points.

The times are changing, and the question for Cuccinelli and the Republicans is whether they can change with them. The GOP cannot continue to behave as if the whole country were a Republican primary—not if it endeavors to recapture the presidency.