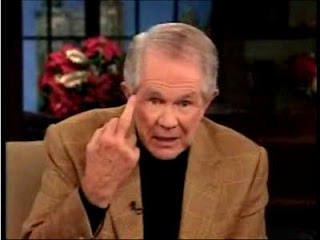 Local Hampton Roads embarrassment and modern day Pharisee extraordinaire, Pat Robertson, has out done himself with a new eruption of verbal diarrhea in which he claims that gay people in San Francisco have special rings infected with HIV that they use to cut unsuspecting people to intentionally infect them.  I think it is time for Robertson's children - who I knew in my Republican days - to lock him away out of sight to end the stream of near constant coming out of the man's mouth.   The man has gone from merely being an anti-gay bigot to someone who is certifiably insane and in need of a serious mental health intervention.  A piece in The New Civil Rights Movement looks at today's batshitery from Robertson.  Here are excerpts:

Octogenarian televangelist and multi-millionaire Pat Robertson has cooked up what might possibly become one of his most vile anti-gay attacks yet. On his “700 Club” show today, Robertson claimed that gay people in San Francisco have special rings infected with HIV that they use to cut unsuspecting people to intentionally infect them. A web search for this phenomenon found nothing, nor did Robertson offer any proof.

“You know what they do in San Francisco, some in the gay community there they want to get people so if they got the stuff they’ll have a ring, you shake hands, and the ring’s got a little thing where you cut your finger,” Robertson told his co-host, Terry Meeuwsen. “Really. It’s that kind of vicious stuff, which would be the equivalent of murder.”

Robertson and Meeuwsen were discussing the concerns of a viewer who had transported an elderly man with HIV/AIDS as part of her service to her church, and she was angry because the church had not disclosed his HIV status.

Perhaps the only good aspect of Robertson's outbursts is that he and Christofascists like him are slowly but  steadily driving the younger generations away from institutional religion completely.  Apparently some at CBN have figured this out as they try to do damage control.  Joe Jervis at Joe My God has details on the effort to claim that Robertson's remarks were "taken out of context":

"I regret that my remarks had been misunderstood, but this often happens because people do not listen to the context of remarks which are being said. In no wise (sic) were my remarks meant as an indictment of the homosexual community or, for that fact, to those infected with this dreadful disease." - Pat Robertson, in a statement emailed to me by the head publicist for the 700 Club.

Let's be honest.  In my view, Robertson is a vile nasty man who has enriched himself fleecing the gullible and peddling hate and bigotry.