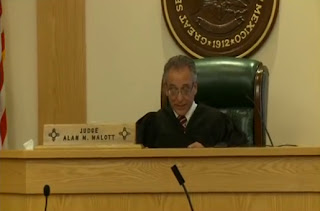 Unlike many states in America, the state of New Mexico never enacted explicit gay marriage bans through either statutes or an anti-gay amendment to the New Mexico Constitution.   As a result in the wake of the U. S. Supreme Court ruling in United States v. Windsor - which among other things correctly identified anti-gay animus as the real motivation behind DOMA - several counties in New Mexico have started issuing marriage licenses to same sex couples.  And as reported previously on this blog, the New Mexico attorney general has announced that he will not oppose the issuance of such licenses.  To further confuse the mix of legal directives, now a judge has ordered county clerks to proceed with the issuance of marriage licenses to same sex couples.  Here are highlights from BuzzFeed:

A New Mexico judge has ordered the county clerks of Bernalillo and Sante Fe counties to begin issuing marriage licenses to same-sex couples who apply and are otherwise qualified.

Because the clerk in Santa Fe County already began issuing licenses last week, as did the clerk of Dona Ana County, the addition of Bernalillo County into the mix makes a third county in the state where licenses will be issued to same-sex couples.

Issuing a peremptory writ of mandamus, Judge Alan Malott found Monday that the couples suing for a right to marry in one of the only states in the nation without either marriage equality or an explicit ban on such marriages have a “significant likelihood of success” on the merits of their lawsuit.   In reading his ruling in open court Monday, Malott said he ordered that:


New Mexico law, Malott found, “does not preclude nor prohibit issuance of a marriage license to otherwise qualified couples on the basis of sexual orientation or the gender of its members.”.


To the extent it is found to do so, “those prohibitions are unconstitutional and unenforceable under” New Mexico’s constitution, he ruled.


Bernalillo County Clerk Maggie Oliver and Santa Fe County Clerk Geraldine Salazar “shall comply with and perform” their duty to issue such licences.
Oliver and Salazar are “enjoined and restrained from refusing to issue” such licenses.

Malott is a district court judge in the Second Judicial District of New Mexico and was appointed to the bench by former Gov. Bill Richardson.

New Mexico Attorney General Gary King, meanwhile, has told that state’s Supreme Court in a third court challenge that any attempt to prohibit same-sex couples from marrying is unconstitutional.

It was not immediately clear who, if anyone, would appeal either last week’s or Monday’s court rulings. The question is relevant because neither ruling creates a final, definitive ruling about state law — a ruling that only could come from the state’s Supreme Court.