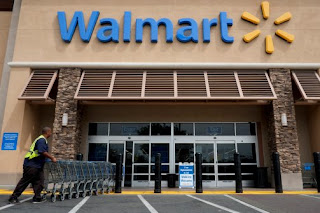 Walmart is frighteningly America's largest employer, albeit many employees receive less than poverty level wages.  Now, in a move that may be aimed at improving the company's miserly image, Walmart is extending domestic partner benefits to its employees, including same sex couples.  One can already hear the exploding heads amongst the Christofascist "family values" organizations and expect calls for a boycott from the loons at American Family Association.  Of course, this would leave many overweight, stretch pants garbed "godly Christian" women in a shopping quandary if they are told to boycott Walmart.  The Daily Beast looks at the development.  Here are excerpts:

Walmart, the nation’s largest private-sector employer, the largest company in the U.S. by revenues, the firm that is No. 1 on the Fortune 500, has generally been resistant to progressive causes. Based in Arkansas, the conservative company has battled unions, higher minimum-wage laws, and health-care mandates. But this week it quietly extended benefits to domestic partners of employees—gay or straight.


Walmart didn’t stand up and unfurl a giant rainbow flag. With open enrollment season coming up, it sent out a postcard, reproduced below, announcing new items available for 2014: a vision plan, new information about quitting tobacco. Oh, and “full-time associates can cover any spouse or domestic partner.” Starting next year, Walmart employees who work more than 34 hours per week can have their domestic partners—gay or straight—covered under company-offered health insurance and that new vision plan.

“The company is continually looking at its benefits programs and seeing what new features can be added,” said Randy Hargrove, a spokesman at Walmart. “Enrolling domestic partners is just one of the things that is being added.” According to a memo, the “full suite” of benefits also includes access to a discount card and spouse/partner life insurance.

Walmart’s move is a sign of how normal it has become for companies to acknowledge, welcome, and seek to embrace their gay employees..
The Human Rights Campaign says 62 percent of Fortune 500 companies have domestic partner health care benefits, up from 34 percent in 2002 and 53 percent in 2006. (Its corporate equality index can be seen here.) According to Mercer Consulting’s national survey of employer-sponsored health plans, the percentage of companies with more than 10 employers making coverage available to same-sex domestic partners rose from 25 percent in 2009 to 52 percent in 2011, and bumped up to 54 percent in 2012.

The trend started in high-end professional services industries such as law, accounting, and finance, said Joan Smyth, partner at Mercer Consulting. “It was a higher-end white collar phenomenon.” But it has spread to lower-paying industries. The motivation is the same at the lower end of the labor market as it is at the higher end: to keep up with competition and remain an attractive employer. Political correctness has little to do with it. “It’s really a decision on the part of employers that they want to attract and retain employees and have a productive work force,” said Piro. “The question becomes, given the industry that you’re in, how do you go about attracting and retaining them? What kind of benefits do you have to provide?”

In retail, apparently, benefits for domestic partners—same sex and opposite sex alike—are what you now have to provide.

Companies have other reasons for extending such benefits. It gives much greater flexibility in recruiting employees to other states or moving employees from operations in one state to another. Employers such as General Electric or Bank of America often want to move employees from, say, New York to North Carolina and then to Iowa, and then on to California. The differential treatment of marriage by states may make some employees think twice about moving.

Companies generally have found that offering benefits to same-sex partners doesn’t inspire a backlash and really doesn’t cost that much. “Anecdotally I can tell you that the take-up rate is fairly small,” said Smyth. Typically, between 1 and 2 percent of employees take companies up on their offers.