Archbishop of Canterbury: The Church Has Supported Homophobia 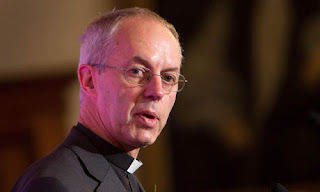 While conservative religious denominations continue an increasingly hysterical war against gays in general and the recognition of same sex relations and marriage in particular the irony is that by doing so they are committing a slow moving form of suicide as those under 30 increasingly are simply walking away from such faith traditions.  Justin Webly, the Archbishop of Canterbury(pictured above) seems to be belatedly waking up to this reality, not that his changing views will be welcome among the vitriolically anti-gay African churches that belong to the Anglican communion.  A piece in The Guardian looks at some of Webly's recent remarks.  Most interestingly, he describes homophobia and its perpetuation to be a sin.  Here are highlights:


Justin Welby thinks that it is a huge problem for the church in this country that it is defined by what it's against. "Young people say 'I don't want to hear about a faith that is homophobic'," he told a gathering of leaders from the Evangelical Alliance on Wednesday, many of whom have campaigned hard against gay marriage.

Second, he used the term "homophobia" in an honest way. There are still some evangelicals who claim it is a made-up term that refers to nothing in particular. Not so Welby. Gay marriage was, he said, an attempt to deal with issues of homophobia. "The church has not been good at dealing with it. We have implicitly and even explicitly supported [homophobia] and that demands repentance."

This is, I think, something that he sees as a command from God, rather than an adjustment to the world.
More to the point, he now understands just how dreadful conservative Christian attitudes seem to anyone under 35. "The vast majority of people under 35 think [the church's resistance to gay marriage] is not just incomprehensible but plain wrong and wicked, and they assimilate it to racism and other horrors."

He made clear later that this attitude was found among young evangelicals as well as ordinary people, and that it was reflected in his experience as well as in public opinion polls.

Of course, this isn't really news. It is a recognition of reality much clearer and more forceful than Rowan Williams could have allowed himself, but the only possible audience for his remarks was sitting in front of him. No one outside the church cares in the slightest what its leaders say about sex. Very few people inside care either: according to the YouGov Westminster Faith Debate polls, only 2% of Anglicans take into account the views of religious leaders when making moral decisions.

Some of his evangelical audience will have heard only what he said about voting against the bill. Others will have understood what he also said about how catastrophic this attitude has become for the credibility of Christianity as a moral force in this country.


The perverse side of me hopes the anti-gay zealots continue their homophobic screeds - it is perhaps the quickest way to ensure that over time their denominations will die and lose all credible influence.  All of which would be a very good thing and an improvement for society.