Will Congress Say "No" to Attacks on Syria? 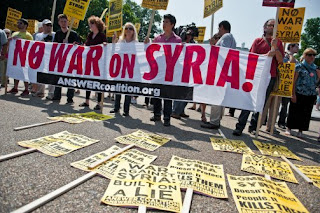 Barack Obama seems to have put himself in a bad spot with all his sabre rattling on the need to attack Syria in response to alleged use of chemical weapon against civilians by the Assad regime.  First, Britain backed out of joining Obama's coalition after a heated debate in the House of Commons.  Now, a growing number of voices are calling for Congress to step up. grow a spine and veto a US attack.  And then, of course, there is the vast majority of the American public which opposes US intervention.  Given this situation, Obama did the smart thing: he's tossed the decision into the lap of Congress.  A piece in The Daily Beast looks at the quickly changing situation.  Here are excerpts:

Barack Obama did the right thing Saturday, on a number of levels. The first and most obvious one: The Constitution calls for it. Yes, we’ve got a history now of more than 50 years of presidents not going to Congress. One of them is named Obama (on Libya). But today he did the right thing by the Constitution:  “Having made my decision as commander-in-chief based on what I think are our national security interests, I’m also mindful that I’m the president of the world’s oldest constitutional democracy.”

Kind of sad that it’s so stunning and refreshing to hear a president acknowledge that he shares constitutional power, but stunning and refreshing it was. This precedent will now be cited by congresses well into the future whenever a president wants to undertake a jolly little shoot-up, he’ll need to go to Congress first (for big, real, ground-troop wars, the pressure to consult Congress will always be great). It’s a big relinquishing of power, a major constitutional recalibration that will outlast him and the yahoos whose votes he’s going to be seeking, and Obama deserves props for it. It was also manifestly clear that this is what the public wanted him to do—79 percent, in yesterday’s NBC poll. If he had launched a strike without consulting Congress in the face of those kinds of numbers and something went really wrong, look out. That way leads political calamity and, as I wrote on Friday, possibly impeachment.

[I]n terms of the domestic political interpretation of any potential military action, no matter what he does, Obama can’t lose. If Congress says no (more on which in a moment), then he doesn’t have to launch a strike that is making Americans very jumpy. If it says yes, then public opinion will presumably come around, and probably world opinion, too, in the 10 or so days between now and the House vote. So those are the upsides. Now let’s do some nose-counting. In the Senate, I presume a resolution will pass. Obama might lose a very small number of Democrats, and maybe Independent Bernie Sanders. But he should get several Senate Republicans  . . . .

[S]till consider approval a real long shot, though. Consider first the number of possible Democratic defections. So far, we know that 18 Democrats signed a letter circulated by Republicans stating that a strike undertaken without congressional approval would violate the Constitution. That concern is taken off the table, so maybe those 18 will play ball. But you have to think that maybe a couple dozen of the most liberal members, representing districts where three-quarters of their constituents are telling them no, will vote against. If I’m right about that, it would mean that Obama would need around 45 Republican votes. Possible?

Obama is still in a spot. After all, he might be forced into a position where, after all this tough talk about century-old international norms, he can’t take action. Depending on how things play out, this could do enormous damage to his international standing. And more importantly, Assad would go unpunished. All of which makes this week one of the most important in Obama’s tenure. The argument to the Republicans in the House and the American people is simple. He’s fulfilled his constitutional duties. Will Congress fulfill its moral ones, or is their hatred of Obama so great that they will instead choose the side of a monstrous murderer?