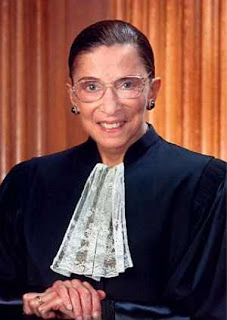 Expect the far right and the Christofascists to foam at the mouth at this news: Justice Ruth Bader Ginsburg will become the first Supreme Court justice to officiate at a same-sex marriage today. Kudos for Ginsburg who truly understands that religious based bigotry of all kinds - be it anti-gay or anti-Semitic or anti-Muslim - has no place in the nation's civil laws.  It is always ironic to me that those on the far right who scream the loudest about religious liberty are always the ones leading the charge to deprive others of their Constitutional right to freedom of  - and from - religion.   As always, the hypocrisy is mind numbing.  Here are highlights from The New Civil Rights Movement on the nuptials that Ginsburg will preside over:

Justice Ruth Bader Ginsburg will become the first Supreme Court justice to officiate at a same-sex marriage on Saturday. The 80-year old jurist who is considered the head of the progressive wing of the Court will marry Michael M. Kaiser and John Roberts (ironically, no relation to the Chief Justice). Roberts is an economist, and Kaiser is the president of Washington, D.C.’s Kennedy Center for the Performing Arts, where the ceremony will be held.

Calling it a “gala wedding” that “brings together the nation’s highest court and the capital’s high society,” the Washington Post reports the wedding “will mark a new milepost in recognition of same-sex unions.”

Ginsburg seemed excited during a recent interview about being the first member of the court to conduct such a ceremony and said it was only a logical next step.

“I think it will be one more statement that people who love each other and want to live together should be able to enjoy the blessings and the strife in the marriage relationship,” Ginsburg said.


She added: “It won’t be long before there will be another” performed by a justice. Indeed, she has another planned for September.

Ginsburg and Kaiser are close friends. She is perhaps the Supreme Court’s most ardent supporter of the fine arts, especially opera. Kaiser has been at the helm of the Kennedy Center since 2001 and is an internationally recognized expert in arts management and one of Washington’s most civic influential leaders.

“I can’t imagine someone I’d rather be married by” than Ginsburg, Kaiser said in an interview.