Will Bob McDonnell Be Indicted? 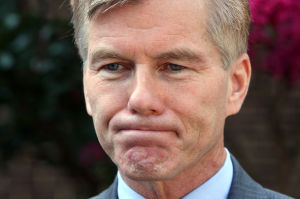 As the Richmond Times Dispatch reports, speculation continues on whether or not Bob McDonnell and/or Maureen "Marie Antoinette" McDonnell in connection with the more than $266,000 in gifts, cash payments and political contributions received from Jonnie R. Williams and Star Scientific.  As noted to date, part of Taliban Bob's defense is that he did not know who much loot his greed driven wife received from Williams.   Meanwhile, there seems to be no explanation from Ms. McDonnell on why she acted like Emelda Marcos in her pursuit of designer clothes on lavish shopping trips to New York City.  Personally, I find it beyond belief that something of wasn't done for Williams/Star Scientific in return for such lavish spending.   As for McDonnell's feigned lack of knowledge, it's what I have called the Sergeant Schultz defense.  I don't buy it.  Here are highlights from the Times Dispatch:

Attorneys and law professors are uncertain whether Gov. Bob McDonnell’s legal troubles could lead to a federal indictment.

But if McDonnell is indicted and declines to step down, Republican legislative leaders privately are steeling themselves to ask the governor to resign to spare the state from distraction as the government gears up to produce a two-year budget by December.


Andrew G. McBride, who spent seven years as an assistant U.S. attorney in the Eastern District of Virginia, and three in the main Department of Justice, said the case doesn’t fit exactly a classic public corruption model — an official act in exchange for some form of compensation.

“At the same time, it has some egregious facts that might well lead the U.S. Attorney’s Office to indict.

“Or, I could very much see a situation, and this is authorized by the U.S. attorney’s manual, where they trade non-indictment of both the governor and the first lady in exchange for the immediate resignation of the governor.”

The coming weeks could be decisive. A decision or announcement could be made within two weeks to avoid getting too close to the November election.

Williams, the Star CEO, is facing his own potential legal troubles. Leading the defense team for Williams are Richard Cullen, chairman of McGuireWoods and a former U.S. attorney for the Eastern District of Virginia; and Toby Vick, a former federal prosecutor.

Lawyers say he could have trouble with the income tax laws for cash gifts made to the McDonnells.


Federal investigators are probing whether McDonnell or his administration provided any benefit to Williams and his company in exchange for the more than $166,000 in gifts, loans and cash payments Williams provided to the first family — in addition to nearly $110,000 in campaign and political action committee donations. The governor has maintained that Star Scientific has not received any special treatment from his administration.

There's more to the piece for those interested.  Again, no one gives that much money without expecting something.
Posted by Michael-in-Norfolk at Sunday, August 25, 2013