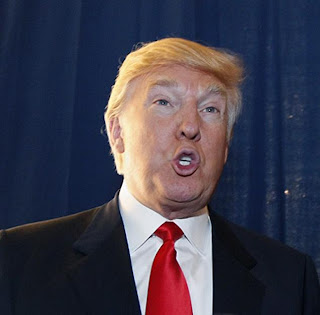 In my opinion, Donald Trump is among the most detestable, ego-maniacal, blow hard s one will ever find.  He is in a tempestuous love affair with himself and knows no limits in pomposity.  And, now New York State has accused him of marketing a fraudulent scheme called "Trump University" that defrauded the gullible out of money.  I sincerely hope that the State of New York wins the case.  Trump, not surprisingly, claims that the lawsuit is politically motivated.  Anything to distract and blow a smoke screen.  Here are highlights from a piece in the Washington Post:

Trump shot back that the Democrat’s lawsuit is false and politically motivated.

Attorney General Eric Schneiderman says many of the 5,000 students who paid up to $35,000 thought they would at least meet Trump but instead all they got was their picture taken in front of a life-size picture of “The Apprentice” TV star.

“Trump University engaged in deception at every stage of consumers’ advancement through costly programs and caused real financial harm,” Schneiderman said. “Trump University, with Donald Trump’s knowledge and participation, relied on Trump’s name recognition and celebrity status to take advantage of consumers who believed in the Trump brand.”

The lawsuit says many of the wannabe moguls were unable to land even one real estate deal and were left far worse off than before the lessons, facing thousands of dollars in debt for the seminar program once billed as a top quality university with Trump’s “hand-picked” instructors.

Schneiderman is suing the program, Trump as the university chairman, and the former president of the university in a case to be handled in state Supreme Court in Manhattan. He accuses them of engaging in persistent fraud, illegal and deceptive conduct and violating federal consumer protection law. The $40 million he seeks is mostly to pay restitution to consumers.  He dismissed Trump’s claim of a political motive.

Schneiderman’s lawsuit covers complaints dating to 2005 through 2011. Students paid between $1,495 and $35,000 to learn from the Manhattan mogul who wrote the best seller, “Art of the Deal” a decade ago followed by “How to Get Rich” and “Think Like a Billionaire.”

At the seminars, consumers were told about “Trump Elite” mentorships that cost $10,000 to $35,000. Students were promised individual instruction until they made their first deal. Schneiderman said participants were urged to extend the limit on their credit cards for real estate deals, but then used the credit to pay for the Trump Elite programs. The attorney general said the program also failed to promptly cancel memberships as promised.

While Trump's program is higher profile than many of these real estate "universities" and "boot camps," there are a plethora of these programs that charge thousands of dollars but deliver little or nothing of substance and disseminate "expert prepared" forms that are mediocre at best.    The only one who gets rich from these programs are those putting on the supposedly educational programs.