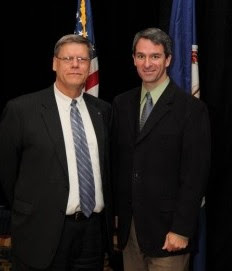 I continue to get chided by Republicans unfamiliar with the inner workings of the GOP or who don't pay close attention until the immediate run up to election day who don't want to accept the reality that the Republican Party, especially in Virginia, has been taken over by religious extremists and down right crazies.  One would think that the Virginia GOP's (i) decision to opt for a convention to nominate candidates rather than hold a primary and (ii) the extremism of the trio of theocrats nominated would be a wake up call.  Yet some continue to cling to the myth that the GOP is still the same party that it once was.  It simply isn't the same party now that the Christofascists and their Tea Party cousins have taken over the grass roots and, in the case of Virginia, the nominating process.  These folks want to end all abortions without exception, restore the sodomy laws and criminalize homosexuality, abolish freedom of religion for all but themselves, and severely restrict the voting rights of those them deed as "other."   And, they want to abolish access to contraception. Don't believe me?  Then listen to the views of Bob FitzSimmonds, the Treasurer of the Republican Party of Virginia (pictured above with GOP gubernatorial candidate whack job, Ken Cuccinelli:

At last weekend’s state party convention, Tribbett asked FitzSimmon whether he supported the distribution of emergency contraception on college campuses. “I’m not a big fan of contraception, frankly,” the Republican Party official explained. “I think there are some issues, we’re giving morning-after pills to 12-year-olds, and pretty soon I guess we’ll hand them out to babies, I don’t know.”

FitzSimmonds also told Tribbett that sex education has caused the spread of sexually transmitted diseases: “I believe that we don’t recognize the causal effect between the type of sex education that we’ve been giving and the spread of STDs. We focus on things like abortion, cause it’s a big pressure thing. I go into schools 15-20 times a year, I run a non-profit that goes into schools and talks to kids about sex. They’re all abortion and HIV. HIV’s kind of hard to catch. Abortion happens if you get pregnant. But we’re on the track for 50 percent of the American people to have Herpes by the time these kids are my age. And that is a profound — not only health but sociological crisis facing this country.”

FitzSimmonds posted on his Facebook page shortly after last November’s election, “When Obama is 90 years old and he dies and goes to Hell, he is going to say ‘This is all Bush’s fault.’”

These folks oppose any right to personal privacy and  and want to police what goes on in every bedroom in Virginia.  People need to wake up to this reality.  After abortion and gays, and disenfranchising minorities, ending contraception is their next target.  Ronald Reagan, William F. Buckley, Jr., and perhaps even Barry Goldwater could not win nominations and/or respect from today's GOP base for the simple reason that they are not insane and were never hard core religious extremists.