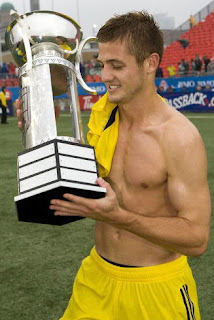 Perhaps we are indeed beginning to see a glacially slow change in pro sports.  First an openly gay member of the NBA.  Now a openly gay pro soccer player.  When will a member of the NFL come out?  This blog looked at soccer player Robbie Rogers back in February when he came out.  Unfortunately, he simultaneously announced his retirement.  But now, he is rejoining the pro sports world and is reported to have been signed by the Los Angeles Galaxy team.  USA Today has the story.  Here are excerpts:

Coming out and coming back — each was a difficult decision for Robbie Rogers, and one complicated the other.

He told the world in February that he is gay and at the same moment said he was leaving soccer. Now, Rogers is reversing field and has agreed to terms with the Los Angeles Galaxy, according to two people familiar with the negotiations. Both spoke to USA TODAY Sports on the condition of anonymity because the Galaxy has not announced the deal.

Rogers will be the first active openly gay player in Major League Soccer.

He also hopes to play for the U.S. national team in the 2014 World Cup — and to be the role model for gay teens that he wished he'd had.

Rogers' epiphany to return to the game came when he spoke to a group of about 500 kids at the Nike Be True LGBT Youth Forum in Portland last month.

"I seriously felt like a coward," he tells USA TODAY Sports in an exclusive interview about his return. "These kids are standing up for themselves and changing the world, and I'm 25, I have a platform and a voice to be a role model. How much of a coward was I to not step up to the plate?"

"I want to come back and be that voice, be that role model," Rogers says. "I want to compete on the field. I want to make it back to the national team. I want to be a role model. I have a lot of motivating factors working for me right now."  "There's a lot to be excited about. It's awesome to be part of a movement that is changing our society."


Needless to say, we will probably hear more hyperventilating and nastiness from the Christofascists who only feel good about themselves when denigrating and stigmatizing others.