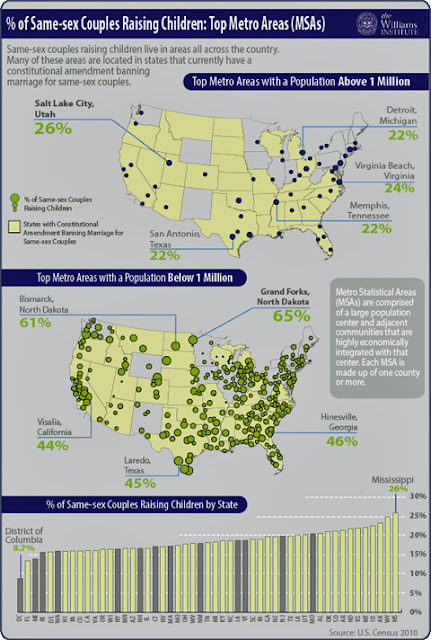 The Christofascists played a lead role in passage of anti-gay marriage amendments - in Virginia, The Family Foundation orchestrated the passage of the Marshall-Newman Amendment - in the hope it would stigmatize same sex couples and perhaps discourage parenting by same sex couples.  A new study by the Williams Institute shows that the results have been just the opposite: states with anti-gay amendments have the highest percentages of same sex couples raising children.  Here in Virginia, surprisingly Virginia Beach has 24% of sames sex couples raising children (see the image above).  Talk about busting The Family Foundation's bubble.  The Los Angeles Times looks at the study's findings:


Salt Lake City: the gay parenting capital of the United States?  Unexpected as it may sound, a new study finds that the Utah capital and its outskirts have the nation's highest percentage of gay or lesbian couples raising children.  Among couples of the same sex in the Salt Lake City area, more than 1 in 4 are rearing children, the analysis of census data reveals.

That fact may seem at odds with perceptions that San Francisco and New York are the centers of gay and lesbian life. Pop culture depicts gays and lesbians turning to adoption, sperm banks or surrogacy to form families in decidedly liberal cities such as Los Angeles.

But the reality for gay parents can be very different, said Gary J. Gates, the researcher behind the new estimates from the Williams Institute at the UCLA School of Law.  For instance, "a big chunk of them are people who had children young, with opposite-sex partners, before they came out," Gates said. After coming out, they raised those children with a partner of the same sex, he explained.

That may be one reason that in some more conservative places not known for celebrating gays and lesbians, a striking percentage of same-sex couples are rearing children, Gates said. Among states, Mississippi has the highest percentage of gay or lesbian couples raising children — 26% — his analysis of census data found.

"When you ask, 'Why are you living here?' they almost always say family," said Abbie Goldberg, an associate professor of psychology at Clark University in Worcester, Mass., who has studied gay and lesbian parents in rural areas. "It shouldn't really be surprising. They value family — and now they're creating families of their own."

Activists who support marriage rights for gays and lesbians said the study underscores that many couples are raising children in states where they lack the protections of wedlock.

Among the most significant things gay marriage bans do is harm children of gays and deprive them of stability.  But then again, once children leave the womb, the Christofascists don't really give a damn about them.