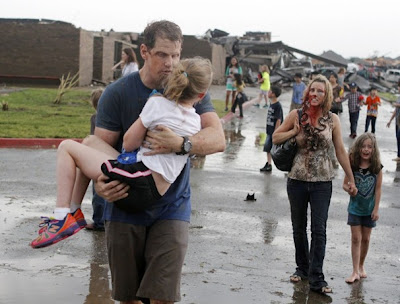 One of the perennial bogey men that the Republicans like to trot out and beat up are the nation's teachers and their various teachers unions.   Teachers are all too often depicted as lazy bureaucrats who are failing to do their jobs and who support a liberal agenda that would destroy traditional America.   And when it comes to slashing budgets, the Republicans love to slash education spending and to cut the ranks of teachers in our public schools. And then every once in a while, a tragedy happens that shows that teachers are not what the far right and the GOP would have the public believe.  Last year we saw the amazing courage and sacrifice made by teachers at Sandy Hook Elementary School in the face of a maniacal shooter.  This week we are seeing profiles in courage and selflessness by teachers at the devastated elementary schools in Moore, Oklahoma.  CNN looks at this latest example of heroism - some would say simply doing their jobs - by teachers.  Here are highlights:

Each day more than 55 million students attend the country's 130,000 schools.  Each day, parents and guardians entrust some 7 million teachers with the education of our children.  And on a normal day, that is all we expect teachers to do -- teach.

The nation watched in horror as a 2-mile-wide tornado with winds up to 200 mph tore through Moore, Oklahoma. As sirens blared and the ground shook, the full force of the twister hit Plaza Towers Elementary School around 3 p.m. It was full of students, young scared children who had nowhere to hide as the tornado ripped off the roof, sending debris everywhere.

"We had to pull a car out of the front hall off a teacher and I don't know what her name is, but she had three little kids underneath her," a rescuer said. "Good job teach."  And that teacher was not the only one whose body shielded children from harm.

A couple of years ago, as state and local officials were looking for ways to cut spending, a study from the American Enterprise Institute emerged in 2011, asking a provocative question: Are teachers overpaid?

Using abbreviated metrics -- such as comparing private sector employees' SAT and GRE scores with those of teachers -- the study's co-author Jason Richwine said the findings suggested that "years of education could be an overestimate of cognitive skills."

A counterintuitive and insulting proposition. But in retrospect that shouldn't be too surprising considering Richwine's doctoral dissertation advocated keeping out immigrants with low IQs, which he maintained are lower than those of the "native white population." He also co-authored an attack on immigration reform for the Heritage Foundation. And he resigned as the group's senior policy analyst shortly afterward.

We can certainly talk about the realities of the economy, debate the best method to evaluate effectiveness and discuss the drawbacks of unions. But anyone who characterizes teachers as overpaid is forgetting what we entrust them with each and every day.  Our children.  On a normal day, you don't think about that too much.

But on a not-so-normal day, that is all you can think about.  Anne Marie Murphy, a mother of four, died trying to protect 6-year-old Dylan Hockley as Adam Lanza terrorized the halls of Sandy Hook Elementary School in December. When police found the two victims, Murphy was still holding Hockley in her arms.  And five other educators did not run away from the threat but gave their lives trying to protect students, trying to protect children.

There is more to the article that deserves a read, but you get the point.  The GOP loves robber barons of Wall Street who make millions exporting American jobs, but as a party the GOP cares little about teachers.  Teachers, many of whom are unsung heroes.   Rather than support them, the GOP is always scheming to lay them off or divert funds to Christofascist schools via vouchers.  We need to rethink how we pay and honor teachers.