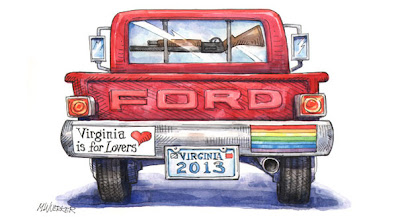 The Republican Party of Virginia's nomination of a slate of extremists for its state wide ticket last weekend is drawing a great deal of media attention to Virginia, most of it negative.  One can't help but wonder what progressive business would want to consider relocating to Virginia as the utter batshitery of Ken Cuccinelli, E.W. Jackson and Mark Obenshain gets increasingly disseminated across the country and world.   The one irony is that all the attention is ruining Ken "Kookinelli" Cuccinelli's effort to avoid social issues in his campaign to dupe voters into believing that his not a religious extremist.   An article in Politico looks at how the campaign season may shape up and how Virginia is suddenly a gay rights battle ground.   Here are article excerpts:

Welcome to the gay rights battleground of Virginia.  Yes, you read that right. In the 2013 off-year elections, a state that once leaned solidly to the center-right has become the newest focal point in the national debate over same-sex relationships. A gubernatorial race already defined partly along culture-war lines has grown even more contentious since last weekend, when Virginia Republicans nominated as their lieutenant governor candidate a firebrand minister who has called gays “very sick people psychologically” and suggested a connection between homosexuality and pedophilia.

After Republicans nominated Rev. E.W. Jackson for lieutenant governor at their state convention last weekend, the Virginia Democratic Party held a conference call – led by openly gay state Sen. Adam Ebbin – to accuse the GOP ticket of representing “the biases of the past.” McAuliffe’s campaign issued a statement Wednesday charging that the gay-rights views of Jackson and GOP gubernatorial nominee Ken Cuccinelli were “divisive,” “dangerous” and bad for business.

Gone, in other words, is the conventional Southern Democratic playbook of running away from the national party on culture. Encouraged by last year’s joint victories by Sen. Tim Kaine and President Barack Obama, Democrats argue this is simply The Way We Live Now in Virginia.

Democratic strategist Mo Elleithee said the fundamentals of Virginia’s cultural politics have changed so sharply that it makes sense for the party to trumpet cultural views that appeal to the state’s increasingly urban and diverse population.

The McAuliffe campaign’s research backs up that assessment, according to multiple operatives involved in the race, who see Cuccinelli and Jackson’s culture-warrior history as a valuable tool for motivating low-turnout Democrats in the off-cycle campaign.

Democratic polls and focus groups have consistently found that voters react with horror to a 2008 statement by Cuccinelli that the “homosexual agenda” brings about “nothing but self-destruction, not only physically but of their soul,” as well as to Cuccinelli’s opposition to public universities including gay-rights protections in their anti-discrimination policies.

University of Virginia professor Larry Sabato said that “twenty years have made a world of difference” in Virginia politics, as far as which side of the cultural divide is safer for statewide candidates.

“The gay rights issue here is emblematic. In the Old Dominion, a party associated with gay rights would be headed for a tumble. Now, it’s exactly the opposite. A sizeable majority in Purple Virginia do not consider the anti-gay views of Cuccinelli and Jackson to be acceptable,” Sabato said. “It’s old versus new. If the Democrats had a nominee like Tim Kaine, this contest would be over.”

Republicans have responded to the emergence of Jackson with reactions that range from cautious to downright critical.

On the Democratic side, too, there’s a recognition that the social-issue message will only be effective if voters believe it’s tied directly to their daily lives. Some voters may turn out simply to send a message to a politician they view as bigoted. But more will turn out and vote if McAuliffe and the rest of the Democratic ticket successfully argue that right-wing cultural views – embodied most vividly by Jackson – will cost Virginia jobs.

I can only pray that the Democrat base wakes up and turns out in November.  If this GOP ticket wins, Virginia will not be a fit place to live for women and minorities, not just gays.