America's Crumbling Infrastructure: I-5 Bridge Collapse Should Be a Wake Up Call 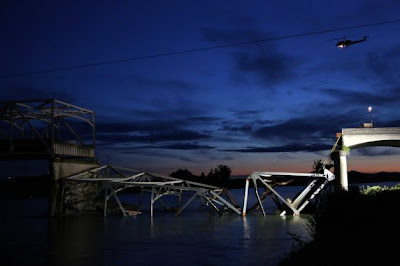 Thankfully, it appears that no one died but the collapse of the Skagit River bridge on Interstate 5 in Washington State (I-5 links Seattle with Canada), but the event ought to be a wake up call nation wide that the GOP and Tea Party opposition to taxes is putting our lives at risk on a daily basis.  Highways, bridges and other critical infrastructure doesn't magically maintain or pay for itself.  Here are details from the Seattle Post:

The collapse of a freeway bridge into the Skagit River derailed a key part of the Northwest's transportation system, but amazingly failed to claim any lives..

Three people suffered non-life-threatening injuries in the dramatic collapse of the Interstate 5 bridge, which occurred around 7 p.m. Thursday. Traffic was snarled on the freeway and nearby roads, and will likely remain so; investigators and one of the survivors say an oversized truck may have been to blame.

A car, a truck and a travel trailer fell into the water in the collapse. All three people who went into the Skagit were rescued safely.

[M]iraculously, authorities said it appeared nobody was killed in the bridge failure that raised the question about the safety of aging spans and cut off the main route between Seattle and Canada.


Traffic along the heavily travelled route could be affected for some time.  “The I-5 corridor is totally disrupted,” said Gov. Jay Inslee, who went to the scene Thursday night.  He said work has already started to design detours, but state Transportation Secretary Lynn Peterson asked people to avoid I-5 in the area for the next several days.

The National Transportation Safety Board was sending an investigative team.

“The bridge just went down, it crashed through the water,” he said. “It was really surreal.”  The bridge was about 50 feet above the water. Deyerin said it appeared that two vehicles - a car and the pickup with the travel trailer attached - fell into the river. He said the water depth was about 15 feet, and the vehicles half-visible in the water likely were resting on portions of the collapsed bridge.

The bridge was not classified as structurally deficient, but a Federal Highway Administration database listed it as being “functionally obsolete” — a category meaning that the design is outdated, such as having narrow shoulders and low clearance underneath.

According to a 2012 Skagit County Public Works Department report, 42 of the county’s 108 bridges are 50 years or older. The document says eight of the bridges are more than 70 years old and two are over 80.

Washington state was given a C in the American Society of Civil Engineers’ 2013 infrastructure report card and a C- when it came to the state’s bridges. The group said more than a quarter of Washington’s 7,840 bridges are considered structurally deficient or functionally obsolete.

On our drive to Alexandria, Virginia, today on I-64 and I-95 we will cross bridges that are equally old and I shudder to think what their state of repair might be.  The surface of the I-64 bridge entering Richmond is in horrible repair and I surely hope that the under structure is in better repair.  Naturally, GOP gubernatorial nominee/nutcase Ken Cuccinelli wants to cut Virginia taxes further - I guess he thinks God will miraculously repair Virginia's crumbling highways.