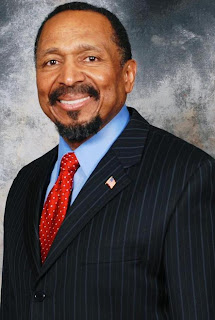 Just two days after his nomination for Lieutenant Governor of Virginia the insane batshitery of E. W. Jackson is beginning to get picked up by the national media.  The LGBT community has known about Jackson's insanity for some time especially given his willingness to be co-opted by NOM and other anti-gay hate groups to lend a black face to their staged attacks of gay rights.  Politico has a piece on Jackson's extremism and BuzzFeed has put together an article titled "The 10 Most Anti-Gay Statements From The Republican Nominee For Lt. Governor Of Virginia."   What's missing, however, in this coverage is the realization that Jackson is mainstream in terms of today's GOP base.  The party has gone virtually insane and just maybe the trio of extremists nominated by the Virginia GOP on Saturday will wake the media up to this reality.  Here are highlights from the Politico piece:

The newly minted Republican nominee for lieutenant governor of Virginia once compared Planned Parenthood to the Ku Klux Klan and bemoaned black voters’ “slavish devotion” to the Democratic Party — past statements that are likely to inflame the culture-war politics of the state’s 2013 elections.

“The Democrat Party has created an unholy alliance between certain so-called civil rights leaders and Planned Parenthood, which has killed unborn black babies by the tens of millions. Planned Parenthood has been far more lethal to black lives than the KKK ever was,” Jackson says in the video.

And on the website of an advocacy group founded by Jackson, Staying True to America’s National Destiny, the activist organization describes abortion as “the equivalent of an idolatrous offering to the god of ‘sexual license.’”  “It is no different than in times past when pagans offered their babies on an altar of fire to assure their own good fortune,” the STAND website says.

The emergence of Jackson as a standard-bearer for the Republican Party could have implications beyond the race for lieutenant governor. Republican gubernatorial candidate Ken Cuccinelli has sought in recent months to keep his campaign message focused on jobs and economic concerns, while Democrats have assailed him for his staunchly conservative record on abortion and gay rights. The selection of Jackson for the GOP ticket may help keep social issues in the foreground of the 2013 debate.

A Jackson adviser did not respond to emails seeking comment. Republican Party of Virginia spokesman Garren Shipley defended the candidate as a person of faith and predicted the 2013 elections would not hinge on social issues.

The BuzzFeed piece list 10 unbelievably ugly things that Jackson has ranted about gays.  Readres need to read the whole piece to fully understand how extreme Jackson is in fact.  Here are a few samplings:

1. “I believe there is a direction connection” (between being gay and being a pedophile).

9. Gay marriage is a “sledge hammer used to shatter our Judeo-Christian culture.”

10. Homosexuality is “killing black men by the thousands” because of HIV. Pro-gay rights liberals have “have done more to kill black folks whom they claim so much to love than the Ku Klux Klan, lynching and slavery and Jim Crow ever did…”


The man is insane yet he is the nominee of a major political party.  Welcome to today's GOP.  One can only hope that Jackson proves to be an anchor tied around the necks of the rest of the GOP ticket.