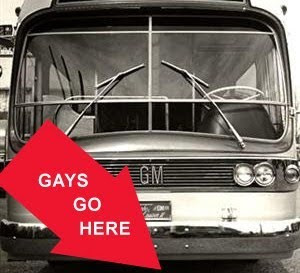 In a first step towards much needed immigration reform, the U.S. Senate Judiciary Committee passed a comprehensive immigration reform bill which will now go to the full Senate for a vote.   Even if the bill passes the Senate, it will still be an uphill battle in the Neanderthal GOP controlled House of Representative  Sadly, the version of the bill that cleared the Committee threw gay bi-national couples under the bus and, absent a striking down of DOMA by the U.S. Supreme Court next month, such couples will continue to face discrimination and having to make the choice of staying with loved ones or leaving the United States.  It's yet another example of Christofascist religious beliefs being given special deference and written into the nation's federal laws.   Equally disturbing was the readiness of Democrat Senators to throw LGBT citizens under the bus - something I will remember when I am next contacted by Democrat Congressional fundraisers.   They will get the same treatment that Democrats gave to LGBT citizens today.  Indeed, I will make a point to tell that it is "with a heavy heart" that I won't be giving them a freaking penny.    Politico looks at this legislative development.  Here are excerpts:

The Senate Judiciary Committee gave final approval Tuesday to a sweeping immigration reform bill, setting up a debate on the Senate floor for early June.

Three Republicans joined 10 Democrats to support the bill, which would create a pathway to citizenship for 11 million undocumented immigrants, invest billions in new border security measures and overhaul the legal immigration system.

Yet even if the bill clears the Senate, the GOP-controlled House isn’t likely to take it up in its current form.

The vote came after the committee deliberated for five days and considered more than 200 amendments. But the Gang of Eight, which drafted the legislation, held together and fended off all but minor changes to the bill.

Senate leaders hope to begin considering the bill following the Memorial Day recess in June. That prospect got a boost on Tuesday when Minority Leader Mitch McConnell (R-Ky.) said he would not block debate from starting on the floor.

House leaders want their members to put forward their own version of immigration reform, which will be more conservative than the Senate bill. A bipartisan group of House negotiators announced an agreement last week on reform principles, but the lawmakers are struggling to finalize the deal.

The bill cleared the Judiciary Committee after an emotional debate over a provision to allow gay Americans to sponsor their foreign-born spouses for green cards. The measure was a top priority of Chairman Patrick Leahy (D-Vt.) and gay rights advocates, but including it threatened to derail the entire legislation. Top Republican negotiators such as Florida Sen. Marco Rubio said they couldn’t support the compromise if the amendment were included.

Leahy, who has sponsored various forms of the gay-rights measure for a decade, said following the debate that he withdrew the amendment with a “heavy heart.”

The Democratic opposition was broader than expected. Sens. Dianne Feinstein (D-Calif.) and Al Franken (D-Minn.) also opposed attaching the amendment to the bill because they said it would imperil immigration reform.

The move drew fire from gay rights advocates. Rachel Tiven, executive director of Immigration Equality, said Leahy is the “only person whose grandchildren are not going to be embarrassed.”

The Judiciary panel spent the day defending the bill’s 13-year path to citizenship, rejecting GOP amendments to rein in the program.    Sen. Ted Cruz (R-Texas) proposed allowing undocumented immigrants to become legal permanent residents, but not citizens. He said the bill is unfair to millions of legal immigrants who have followed rules and that it would only encourage more illegal immigration.