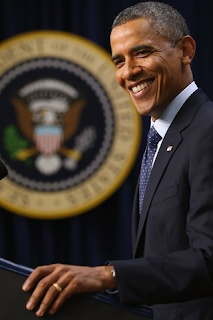 As note a number of times over the last week or so, the only real motivation behind the constant shrieks of Congressional Republicans over Benghazi and the IRS scrutiny of conservative Tea Party groups seeking tax exempt status is the desire to harm Barack Obama's standing with the American public.  The secondary motivation is to harm Hillary Clinton's reputation given her likelihood as a fierce GOP opponent in 2016.  In this later regard, wingnut radio host Pete Santilli actually said that he wants to see Hillary Clinton shot in the vagina (he later tweeted that he wanted President Obama shot in the testicles).  That's how low conservatism and the Republican Party have fallen.   What's frightening is that some of the delusional GOP base might actually try to follow through on such incitement.  The irony is that despite all of these GOP efforts - which seem to be resonating only with the Neanderthals of their party base - Barack Obama's approval ratings have gone up.  Politicususa has details.  Here are highlights:

Despite the many attempts by Republicans to generate a scandal, a new CNN/ORC poll found that the president’s approval ratings have increased by two points.

The latest CNN/ORC poll reveals that President Obama’s approval rating has gone up by two points from 51% in April to 53% today, while his disapproval rating has fallen by two points from 47% to 45%. While 85% of those polled agree that the IRS targeted of political groups is very or somewhat important issue, by a margin of 61%-37% respondents believed that President Obama’s statements on the matter have been completely mostly true. (That 37% number comes up a lot in polling. It represents the higher end of the number of self-identified conservatives/Republicans in the country.)   By a margin of 54%-42% respondents think Republicans are reacting appropriately to the matter, but the vast majority (55%-37%) believe that the IRS acted alone without White House orders.

A majority of those polled were dissatisfied with the way the Obama administration handled Benghazi (53%), but they believe that the administration was passing along the facts as they knew them to be at that time (50%-44%).

The scandals appear to be backfiring, and setting a dangerous trap for Republicans. The fundamental political dynamic of President Obama being much more popular than the Republican Party is shaping these numbers. If the unpopular congressional Republicans continue to attack Obama with scandals, they will make the president more popular and drive his poll numbers up.

These “scandals” haven’t hurt President Obama at all. The most logical reasons for this are that people aren’t paying attention, and those who are don’t believe the Republicans.

Not to sound like a broken record, but in my view, the number one reason the GOP base hates Obama boils down to one thing first and foremost: he is not white.  That being the case, the angry whites and white supremacists in the GOP base will always hate Obama no matter what he does.   One can only hope that the rest of the public will fully wake up to this reality.