The Catholic Church, Gays and the Boys Scouts 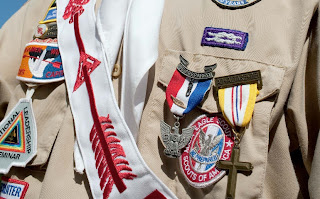 Will the Roman Catholic Church blink on the issue of gay boy scouts?  That is the question some are asking and a column in the National Catholic Reporter makes the case as to why the Church should support openly gay scouts - and scout leaders.  At least if it wants to prove that it's not being simply hypocritical and speaking out of both sides of its mouth.  Given the level of self-loathing among the closeted members of the Church hierarchy and the Church hierarchy's obsession with all things sexual, the message may well fall on deaf ears.   Here are column excerpts:

On Easter Sunday, New York Cardinal Timothy Dolan appeared on national television and reaffirmed Catholic teaching regarding the impermissibility of same-sex marriage. He admitted however that the Catholic church must ensure “that our defense of marriage is not reduced to an attack on gay people. And I admit, we haven’t been too good at that.”

For Dolan and most other bishops, church teaching on sexual morality is not a matter for open debate. What is open for discussion, Dolan suggests, is the consistency of the Catholic witness regarding the inalienable dignity and value of gay and lesbian persons. If the Catholic Church is to make good on the claim that it is not anti-gay, then it will have to stand up for the rights of gays and lesbians with the same force with which it has stood up for the dignity of the unborn and the rights of immigrants.

They might begin by assessing the U.S. Catholic church’s traditional support of the Boy Scouts of America. After all, Catholic parishes sponsor approximately 10 percent of the Boy Scout troops in the United States. The U.S. bishops conference even has an official episcopal liaison to the National Catholic Committee on Scouting.

My son Andrew is not only an Eagle Scout; he served as senior patrol leader of his Catholic troop. He also spent three summers as a leader at a Boy Scout summer camp where he shared responsibility for the daily operation of the camp. Because of his reputation for relating well to the younger scouts, whenever boys became homesick or there was a disciplinary issue, more often than not they were sent to Andrew for counseling and support. Unfortunately, because of current Boy Scout policy, that is a role he can no longer play. During his freshman year of college Andrew publicly acknowledged his same-sex orientation and was therefore no longer allowed to serve as a scout leader.

The Boy Scouts of America are in the midst of a reconsideration of their longstanding opposition to gays as scouts and scout leaders. Consequently, a public statement by Catholic bishops supporting a change in scouting policy would go a long way toward demonstrating that church teaching does not justify discrimination against gays and lesbians.

Though few will state it publicly, one of the arguments against admitting homosexuals as adult scout leaders is the unsubstantiated belief that homosexuals are more prone to sexual abuse of children than are heterosexuals. Similarly fallacious arguments have been made regarding the predilection of Roman Catholic clergy to sexual abuse of children. Consequently, one would think that Catholic church leadership would be particularly sensitive to such unjust assumptions. Yet the silence of Catholic leadership regarding the Boy Scout controversy has been deafening.

If Dolan wants the Catholic church to do a better job demonstrating that it is not anti-gay, he might encourage the bishops’ conference to declare publicly its opposition to any scout policy that would either prohibit gay youth from joining a scout troop or gays and lesbians from serving as adult scout leaders.  If the bishops were to call for Catholic parishes to disaffiliate with any scout troop that perpetuates BSA’s current discriminatory policy they would gain some badly needed credibility as defenders of the dignity of all persons, regardless of gender, race, age or sexual orientation.


Personally, I am not going to be holding my breath to see the Church do what is right.