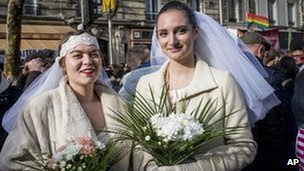 Friday French President Francois Hollande signed gay marriage into law after an eleven hour appeal by the far right challenging the constitutionality of the law.  The Constitutional Council rejected the challenge and it is expected that marriages will begin before the end of the month.   It goes without saying that the child rapist enablers in the Roman Catholic Church hierarchy and their accessories in crime in the pews are big time unhappy.   France is yet a former Catholic bastion which has ignored the Church's hysteria and anti-gay bigotry and embraced modernity and equality.  The BBC reports on this final step in passage of marriage equality.  Here are excerpts:

On Friday, the Constitutional Council rejected a challenge by the right-wing opposition, clearing the way for Francois Hollande to sign the bill.

He said: "I have taken [the decision]; now it is time to respect the law of the Republic."  The first gay wedding could be held 10 days after the bill's signing.

The anti-gay marriage lobby, backed by the Catholic Church and conservative opposition, argues the bill will undermine an essential building block of society.

Opinion polls have suggested that around 55-60% of French people support gay marriage, but only about 50% approve of gay adoption.

France is now the 14th country to legalize gay marriage after New Zealand last month.  It is also the ninth country in Europe to allow same-sex marriage after legalisation in the traditionally liberal Netherlands and Scandinavia, but also in strongly Catholic Portugal and Spain. Legislation is also moving through the UK Parliament.

I continue to believe opposition to gay marriage ultimately stems from several things: (i) the reaction of the Catholic Church  and other anti-equality churches to finally losing undeserved rights and privileges, (ii) the need for some individuals to have others subjected to discrimination so that they can feel superior about themselves, and (iii) gay marriage sends a strong message that a handful of Bible passages used against gays are wrong and this threatens the make believe world of the Christofascists.  The irony is that a far bigger threat exists to the Christian story line:  The human genome project has confirmed that Adam and Eve never existed as historical individuals.  As a result, there was no "fall" in the Garden of Eden, there is no such thing as original sin inherited from Adam and Eve, and there was no need for a Messiah to redeem mankind from original sin.  Gay marriage is ultimately the least of the Christofascists problems.