Growing Divide In GOP Over Whether to Crash the Economy 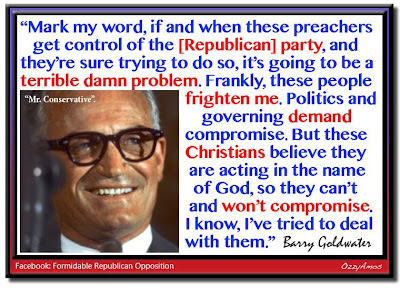 The insurgent Christofascist and Tea Party elements seem Hell bent on creating another budget/debt ceiling crisis and reject any approaches that would call for meaningful negotiations.  Some in the so-called old guard of the GOP seem to be belatedly recognizing the danger this poses for the slowly recovering economy and that never ending obstructionism and sabotage has political risks, especially with polls showing only 37% of voters seeing the GOP as focused on issues important to average Americans.  One thing that cannot be forgotten is that 85% of the Tea Party consists of Christofascists. A piece in the New York Times looks at the growing intra-party tension.  Here are highlights:

In full view of C-Span cameras trained on the floor this week, Senators John McCain of Arizona and Susan Collins of Maine jousted with a new generation of conservatives — Marco Rubio of Florida, Ted Cruz of Texas, Mike Lee of Utah and Rand Paul of Kentucky — over the party’s refusal to allow the Senate to open budget talks with the House despite Senate Republicans’ long call for Democrats to produce a budget.

It was the Old Guard versus the Tea Party, but with real ramifications, as Congress careens toward another debt limit and spending crisis this fall with seemingly no one at the steering wheel. The newer members say negotiations should go forward only with a binding precondition that a budget deal cannot raise the government’s statutory borrowing limit.

“I have tremendous respect for this institution,” Mr. Rubio said in an interview on Friday. “But I’m not all that interested in the way things have always been done around here.”

Republicans made the failure of Senate Democrats to pass a budget a central talking point in the 2012 campaign, going so far this year as to pass legislation withholding Congressional pay if budgets were not approved this spring. Now, some Republicans say the fact that members of their own party are standing in the way of a House-Senate conference committee undermines their fiscal message.


Mr. McCain called the demands of his Republican colleagues “absolutely out of line and unprecedented.” The Senate passed the budget before dawn on March 23 after a grueling all-night session, he noted, saying it was time to try to reach a final deal with the House in a negotiating conference.

“Will this deliberative body, whether it is the greatest in the world or the worst in the world, go ahead and decide on this issue, so we can at least tell the American people we are going to do what we haven’t done for four years and what every family in America sooner or later has to do — and that is to have a budget?” he asked. Although few of Mr. McCain’s colleagues took to the floor to join him, many have expressed similar views.

Republicans who have made the deficit their central ideological focus are, in some sense, the dog that caught the bus. The nonpartisan Congressional Budget Office estimated this month that the deficit for this fiscal year, which ends Sept. 30, will fall to about $642 billion, or 4 percent of the nation’s annual economic output, less than half the 2011 deficit and about $200 billion lower than the agency had estimated three months ago.

House Republicans had envisioned a plan to reach a comprehensive deficit reduction deal predicated on a showdown in July over the debt ceiling. That showdown was supposed to drive both sides back to the bargaining table, but a rapidly falling deficit, rising tax payments and huge infusions of cash from the newly profitable, federally controlled home financing agencies Fannie Mae and Freddie Mac have scrambled those plans. Now, the debt ceiling may not have to be raised until October or November, in the next fiscal year.


“They could create crisis by having a government shutdown or holding everything back until November and threatening a debt default. That would be to their political detriment,” [Senator] Ms. [Patty] Murray said. “I think the American people have had it with that kind of hostage-taking.”

But Mr. Rubio said that he was not about to give in, and that a single senator might have the power to hold back negotiations indefinitely. “I’m not sure this is an issue I can ever change my opinion on,” he said.

The GOP's big problem is that it now has too many insane extremists in the party who simply cannot be made to see reason or that their willingness to trash the economy and the lives of everyday Americans is not in the party's long therm best interests.