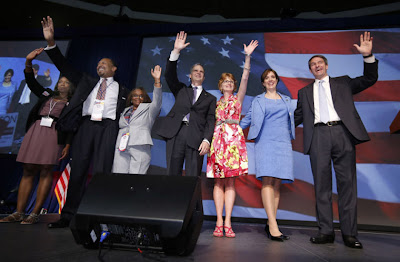 Yesterday, the Republican Party of Virginia - or more correctly, The Family Foundation and Tea Party elements - nominated one of the most extremist tickets in the history of the Commonwealth with Ken "Kookinelli" Cuccinelli headed the ticket as for Governor.   For Lt. Governor, an equally insane candidate was selected: E.W. Jackson, a vitriolic anti-gay minister from Chesapeake.  Rounding out the ticket is state Sen. Mark D. Obenshain who looks sane only in comparison to Kookinelli and Jackson.  Like his ticket mates, Obenshain is vociferously anti-gay and was a ringleader in new voter ID law enacted during the last session of the General Assembly aimed at disenfranchising minority voters.   But for Jackson who is black, one might think the ticket represents a merger of the KKK and the Inquisition.

Those in the GOP who have whined that Republicans lose because they don't pick candidates to the far right will get to test their theory.  One can only hope that they go down to massive defeat - the boyfriend and I will certainly do our part to defeat these extremists and plan on housing a McAuliffe staffer for several months in the lead up to the election.  Here are highlights from the Washington Post on yesterday's coronation of lunacy:

At the top of the ticket is gubernatorial hopeful Ken Cuccinelli II, the attorney general. Known for high-profile battles against “Obamacare,” abortion and a university climate scientist, Cuccinelli stood by what detractors have called an out-of-the-mainstream agenda.

E.W. Jackson, a minister from Chesapeake, won the nomination for lieutenant governor with a full-throated appeal for limited government, traditional families and gun rights. “We will not only win an election in November, we will open the hearts and minds of our people and save this commonwealth and save this country,” said Jackson, the first African American nominated by the Virginia GOP for statewide office since 1988.

For attorney general, the party nominated state Sen. Mark D. Obenshain (R-Harrisonburg), who this year successfully pushed tougher voter ID rules. “Are you ready to stop Obamacare in its tracks?” he asked the crowd in his acceptance speech, eliciting cheers.

“The tea party leaders in Virginia are not for toning it down,” said Mark Daugherty, chairman of the Virginia Tea Party Patriots Federation, which unites 46 tea party groups across the state. “We think folks who left us billions in debt and deficits and regulations, they need to tone it down. . . . Trying to move to the middle, or moderate your view, or tone down your conservative view is the wrong approach to future electoral success.”

No matter how the Virginia GOP’s strategy plays out in November, it will not go unnoticed. The state is one of just two with governor’s races this year. With New Jersey Gov. Chris Christie (R) expected to win reelection, Cuccinelli’s race against former Democratic National Committee Chairman Terry McAuliffe has drawn national attention. Depending on how the race goes, Republicans across the country are likely to use Virginia’s governor’s race as a road map — or as an example of what not to do.

The comment by Daugherty, the Tea Party leader, epitomizes the idiocy of the GOP.  It was George W. Bush, Dick Cheney and a GOP controlled Congress that left the nation "billions in debt and deficits and regulations."  And actually, more regulation restraining Wall Street and mortgage lenders might have avoided the collapse of the housing market and the economy.  As I have said before, nowadays, to be a Republican one needs to be insane, have had a lobotomy, be a spittle flecked religious extremist, a white supremacist or some combination thereof.   My departed Republican ancestors must be rolling in their graves to see what the GOP has become.