So far Virginia GOP Attorney General nominee Mark Obenshain comes off as relatively sane compared to the utterly insane E. W. Jackson, GOP nominee for Lt. Governor, and the nearly as insane Ken Cuccinelli.  But that assessment is only because (i) he's not quite as crazy as his ticket mates and (ii) because he has thrown himself into the media limelight less frequently.  Once his voting and legislative record is scrutinized, it quickly becomes clear that he inhabits the same far right Christianist theocratic alternate universe as Jackson and Cuccinelli.  A piece at Think Progress looks at Obenshain's effort to require all Virginia women suffering a miscarriage to submit a report to the police - apparently so that an investigation could be undertaken to confirm that the miscarriage had not been induced.  Here are highlights:


If a woman in Virginia has a miscarriage without a doctor present, they must report it within 24 hours to the police or risk going to jail for a full year. At least, that’s what would have happened if a bill introduced by Virginia state Sen. Mark Obenshain (R) had become law.


When a fetal death occurs without medical attendance upon the mother at or after the delivery or abortion, the mother or someone acting on her behalf shall, within 24 hours, report the fetal death, location of the remains, and identity of the mother to the local or state police or sheriff’s department of the city or county where the fetal death occurred. No one shall remove, destroy, or otherwise dispose of any remains without the express authorization of law-enforcement officials or the medical examiner. Any person violating the provisions of this subsection shall be guilty of a Class 1 misdemeanor.

Under Virginia law, a Class 1 misdemeanor carries a maximum sentence of “confinement in jail for not more than twelve months and a fine of not more than $2,500,” so Obenshain’s bill could lead to a woman who decides to take a day to grieve the loss of a pregnancy she’d hoped to carry to term spending a year of her life in jail for that decision.

Even without Obenshain’s bill, Virginia law already treats many miscarriages as potential crimes. Under existing Virginia law, “[w]hen a fetal death occurs without medical attendance upon the mother at or after the delivery or abortion or when inquiry or investigation by a medical examiner is required, the medical examiner shall investigate the cause of fetal death and shall complete and sign the medical certification portion of the fetal death report within twenty-four hours after being notified of a fetal death.” Obsenshain’s bill, however, would treat many women as if they were criminal suspects at the moment they are confronted with a deep personal tragedy — and imprison them if they would rather deal with that tragedy privately with their family than share the vulnerable moment after a miscarriage with law enforcement.

It should also be noted that Obenshain supports a "personhood" bill that would outlaw all abortions and grant full constitutional rights to a fetus from the moment of conception.   Even voters in Mississippi found such a similar law proposed for that state abhorrent and voted it down, yet Obenshain has championed an equivalent bill in Virginia.

I suspect that readers outside of Virginia find it hard to believe just how extreme the Christofascists are in this state.  They want nothing less than a Christian theocracy and want to micromanage everyone's sex lives to make sure they conform to the poisonous, fear driven religious dogma to which these religious extremists subscribe.  It's down right scary and the women of Virginia need to wake up and go to the polls in November and vote a straight Democrat ticket. 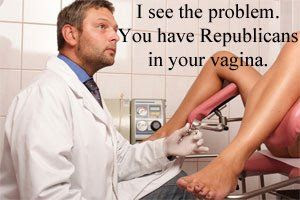