Mitch McConnell Backs Away From GOP Claims Of Benghazi Cover Up 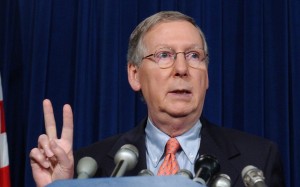 As noted before, based on what is currently known, none of the three "scandals" that the Congressional Republicans are currently hyperventilating about add up to any real scandal and certainly nothing that implicates the White House and Barack Obama.  Not that this matters to much of the GOP base which is so outraged at having a black man in the White House that they will grasp at anything in the hope of destroying the man.  Interestingly enough, today Mitch McConnell - for who I have no use whatsoever - seemed to be at last backing away from the shrill screams of "cover up" emanating from some GOP circles.  Think Progress looks at McConnell's new found moderation.  Here are excerpts:

On Sunday, during an appearance on Meet The Press, Sen. Mitch McConnell (R-KY) — the GOP leader in the senate — distanced himself from Republican efforts to portray the Obama administration’s response to the attacks on a U.S. diplomatic issue in Benghazi, Libya as a Watergate-level scandal that should result in impeachment. McConnell’s comments come just days after the White House released 100 pages of emails undermining GOP claims that administration officials doctored the public talking points U.N. Ambassador Susan Rice used to discuss the incident on the Sunday morning talk shows.

“You’re talking about others who may have said various things about this, let me tell you what I think about it. It’s clear there was inadequate security out there and it’s very clear that it was inconvenient within six weeks of the election, for the administration to in effect announce, that it was a terrorist attack,” McConnell said. “I think that’s worth examining, it is going to be examined.”

But asked repeatedly if Republicans should tone down their attacks against the administration, McConnell demurred, saying only that Obama should allow for an investigation. He also couldn’t identify specific evidence of an administration cover-up:


DAVID GREGORY (HOST): But you have specific evidence that they made up a tale, or was it based on information they had at the time?


MCCONNELL: Well, the talking points clearly were not accurate. I think getting to the bottom of this is an important investigation.

E-mails between the White House, CIA, State Department, Justice Department, and the FBI show that Rice’s remarks reflect the early view of the intelligence community and were produced with few changes from the White House.    On Thursday, CBS’ Major Garrett reported that Republican sources misquoted or significantly embellished the emails officials used to draft Rice’s remarks in order to implicate the administration in a conspiracy to mislead the public about Benghazi.