The Insanity of the Virginia GOP Slate Speaks Volumes 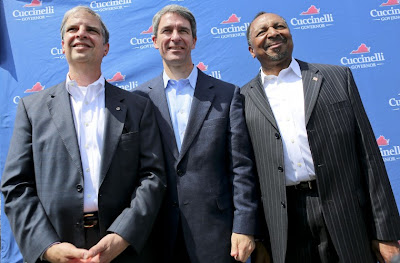 For years now I have been arguing that the Republican Party - especially here in Virginia - has been taken over by far right religious extremists.  Why?  Because I saw it when it first began in earnest years ago and the insanity and refusal to separate religion from the civil laws caused me to resign from the GOP.  I could not remain in a political party that sought and continues to seek to destroy the separation of church and state and impose a fear and hate based religious dogma on all citizens.   With last weeks nomination of Ken Cuccinelli, E. W. Jackson and Mark Obenshain, the Christofascist take over of the Republican Party of Virginia is complete.  The Family Foundation ("TFF") finally fully controls the levers of power in the Virginia GOP.  Sane and rational Virginians ought to be terrified.  These are NOT nice people.  They have an agenda that is anti-democracy and anti-constitutional rights for all citizens.  E.W. Jackson in particular is the perfect candidate from the perspective of the "world view" of the folks at TFF.  An article in the Washington Post looks at the GOP's extremism and what it may mean in the coming election.  Here are highlights:

As midnight approached on the eve of the Republican convention in Virginia, party loyalists were tipping beers and listening to country music at a rollicking fete hosted by Pete Snyder, a front-runner for the nomination for lieutenant governor.

Down the hall at the Marriott in Richmond, a minister also running for Virginia’s second-highest office, E.W. Jackson, was lingering at his own party, where a Bible and a cross were displayed at the entrance. The ballroom was largely empty. If the excitement at Snyder’s gathering suggested momentum, the quiet at Jackson’s spelled a looming return to obscurity.

Twenty-four hours later, after delivering a thunderous speech that seized the convention, Jackson was the Republican nominee and the party’s first black candidate for statewide office since 1988.

Jackson’s words — sometimes eloquent, sometimes raw, often impassioned — are causing anxiety for many Republicans as the resurfacing of his past statements about homosexuality and abortion have threatened to disrupt the campaign.

Instead of promoting their new ticket, Republicans have answered for Jackson’s once calling gays “perverted” and “sick” and saying Planned Parenthood has been “far more lethal” to blacks “than the KKK.”

“The Republicans I’m talking to are saying, ‘What the hell are they doing in Virginia?’ ” said Michael Steele, former chairman of the Republican National Committee. “Is this, ‘101 ways to lose an election’? You’re coming out of the gate with comments everyone has to explain. You’re wasting a lot of time and energy batting that back when you should be doing other things to get the guy known.”

Although unknown to many Republicans, Jackson in recent years has built a following among the most activist of Virginia’s conservatives, many of whom were delegates at the convention. But Republicans are now concerned, Steele said, that Jackson will turn off the party’s own voters. “You can’t have a situation where Republicans say, ‘You know what? I can’t have this’ and they stay home or vote for the other guy,” he said.

Jackson seems uninterested in moderating himself. He paused between whirlwind campaign stops this week to tell reporters that he doesn’t have “anything to rephrase or apologize for.”  .   .   .   .  Jackson became a Republican in the early 1980s, explaining that Democrats’ embrace of the gay rights movement violated his religious beliefs. In 1989, he joined the opposition to a proposal to ban discrimination against gays and lesbians in Massachusetts.

Helena Dobson, president of Chesapeake’s local NAACP chapter, said she has no relationship with Jackson.

While much of the focus is on Jackson, Ken "Kookinelli" Cuccinelli holds identical views - he's simply a bit more discrete in saying things in public.  A gay activist friend once went under cover to an event at Liberty University and heard Cuccinelli speaking to a closed audience and described Cuccinelli and his views as "very frightening."  One can only hope that someone will secretly film Cuccinelli as happened with Mitt Romney.  Romney would like a flaming liberal in comparison.  The extremism of this ticket needs to be fully exposed.