Why Was London Murderer On the Loose? 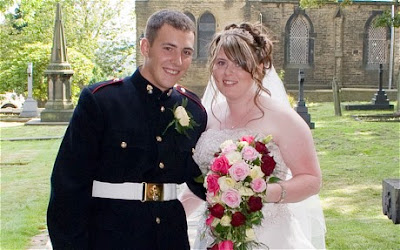 Just as the American authorities had to answer why one of the Boston Marathon bombers had slipped through their scrutiny, now MI5 and other British authorities are having to answer why one of the terrorists who literally butchered a British soldier (the victim is shown above on his wedding day) was not in custody.  Apparently, just as is the case with the City of Norfolk with the thugs terrorizing the neighborhood where my residence in Norfolk is located, UK security forces were more solicitous of the rights of the trouble maker/terrorist than they were of the rights and safety of law abiding citizens.  I'm not in favor of throwing away constitutional rights, but at some point there needs to be a balance that protects the law abiding from those who act little better than vicious, rabid animals.  Something is seriously wrong both here in America and in the UK.  The Telegraph looks at the questions swirling in the UK.  Here are excerpts:

Michael Adebolajo, 28, was the man videoed by witnesses with his hands red with blood following the killing of the soldier, who was named as Drummer Lee Rigby, 25, the father of a two-year-old son.

David Cameron said there would be a full investigation by the Security and Intelligence Committee after it emerged that both of the attackers were known to the police and MI5, but neither was assessed as a major security risk.

The Telegraph has learnt that six years ago Adebolajo was arrested after being involved in violent protests by extremists outside the Old Bailey. He was a regular member of a small group of hardcore fanatics who regularly protested alongside some of Britain’s most notorious hate clerics. He was seen preaching anti-Western rhetoric in Woolwich as recently as last week. At one stage he is believed to have tried to travel to Somalia to join the terrorist network Al-Shabaab, but was forced to return to Britain.

The disclosure of his close association with some of Britain’s most notorious Islamic extremists is likely to raise further questions about why he was not deemed a serious threat by the security services.

The second attacker has not been identified but investigators are examining whether he had a criminal past.

Drummer Rigby, of 2nd Bn The Royal Regiment of Fusiliers, was run over and attacked with knives and cleavers as he walked back to barracks in Woolwich, south-east London on Wednesday afternoon. Known as “Riggers”, he was praised by his colleagues as a “true warrior” who had served in Afghanistan, Cyprus and Germany, and by his family as a loving father to his son, Jack.

Of course, the bigger question is when the Hell is religion - be it Christianity or Islam - going to stop being afforded special deference, privileges and exceptions to hate speech?   Religion simply deserves no respect or deference.  Religion through the centuries has been a pernicious evil.  When will the larger public say "enough" and start treating extremists be they ones like the killers in London or GOP nominees Ken Cuccinelli and E. W. Jackson like the potentially dangerous purveyors of hate that they are?