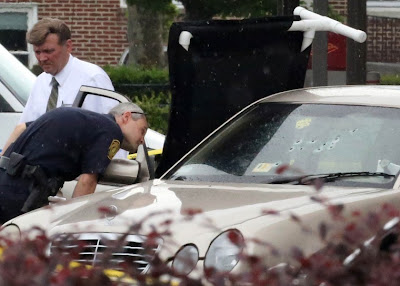 I've posted recently about the problems that I have had with my home in Norfolk where my daughter and her family had been living up until a week ago.  For the who missed the prior post, a rental house backing up to mine has been rented to what in my opinion hoodlums and my house has been hit by gun fire, nuisance level music and rowdy parties with under age drinking have been the norm, my family members have been threatened and intimidated and to date the City of Norfolk and its police department has done nothing to shut down the out of control situation.   Apparently, others have picked up on the message being sent that one can do whatever one wants and face no consequences.  How else to explain events across the street from my law office today:  a man allegedly tried to pass a bad check at the Wells Fargo branch across the street and then tried to run down two responding police officers.  A shoot out ensued (and the perpetrator's car pictured above was riddled with almost a dozen bullets) and the would be bad check passer was killed.  Here are highlights from the Virginian Pilot:

One man was killed and an officer was injured during a police-involved shooting at a Ghent bank Monday afternoon.

Officers were called to the Wells Fargo at 21st Street and Colonial Avenue about 2:40 p.m. for a report of someone trying to pass a bad check, said Karen Parker-Chesson, a Norfolk police spokeswoman.

Two officers approached a car in the parking lot. The driver put the car in reverse and, as the officers moved closer, accelerated and struck one of them, Parker-Chesson said. The second officer fired at the car, killing the driver, she said.

Police identified the driver as Joshua Johnson, 22, of Norfolk.

Tiarra Jackson was ringing up a customer across the street at the Sherwin-Williams paint store when she heard what turned out to be gunfire.

She said she saw the cream-colored car move quickly in reverse and strike something like a curb. As officers approached the car with weapons drawn, the car backed out of her view.

Yes, it is frightening.  Both what happened this afternoon and what has occurred in the neighborhood where my property is located.  It is also frightening that, based on conversations with civic league members in other neighborhoods, the lawlessness  I have experienced is not the exception to the rule.  And what is Norfolk City Council doing?  Slashing funding for neighborhood preservation, maintaining an under staffed police force and giving tens of millions of dollars to private hotel developers.   Norfolk is a study in misplaced priorities.  One can only wonder whether Mayor Paul Fraim will finally get off his butt and demand that taxpaying residents be protected from violence and lawless behavior.