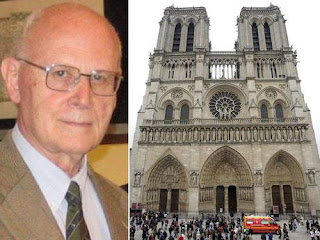 Believe me, I do not want to sound mean spirited or judgmental, but I am increasingly coming to equate fundamental religious belief with some form of mental illness.    How else to explain the uncontrollable hysteria that the prospect of gay civil marriage creates in Christofascists.  Their fragile, artificial house of cards world simply cannot survive anything that suggests that their beliefs might not be true.  And anything - and anyone - that threatens their artificial world view construct will be met with hate and violence.  In Paris today, we saw this insanity/hysteria in full display when a far right Catholic committed suicide at an altar in Notre Dame Cathedral in reaction to the passage of same sex marriage into law in France.  Think about it.  Civil law gay marriage does NOTHING to heterosexual marriages.  It forces nothing onto religious denominations that oppose gay marriage.  It takes no rights away from heterosexuals.  It only means that Christofascist religious beliefs on marriage can no longer be forced on all of society.  And that alone was enough to cause Dominique Venner (pictured above) to blow his brains out standing at an altar in Notre Dame Cathedral.  Here are highlights from The Independent:

A far-right French historian shot himself in the head beside the altar of Notre Dame cathedral in Paris today apparently in protest against the legalisation of gay marriage in France.

Dominique Venner, 78, a former member of the nationalist terrorist movement, OAS, placed a pistol in his mouth and shot himself dead in front of scores of tourists inside the most visited building in France.

Mr Venner, a presenter on a Catholic-traditionalust radio station and controversial historian and essayist,  posted an essay on his website earlier in the day calling for "new, spectacular and symbolic actions to shake us out of our sleep, to jolt anaesthetised minds and to reawaken memory of our origins".

His long essay was a tirade against gay marriage but also a warning that the "population of France and Europe" was going to be "replaced" and brought under "Islamist control" and "sharia law".

Mr Venner placed a sealed letter on the altar of the cathedral before shooting himself. His choice of the altar - associated  with religious marriage ceremonies -appeared to be a symbolic gesture of protest against the law permitting civil gay marriages in France which took effect last weekend.


The "marriage for all" law has provoked a powerful movement of middle class, conservative, religious and right-wing protest in the last four months. Another large demonstration is planned in Paris on Sunday.

Mr Venner, a prolific author of books and tracts on extreme nationalist themes, has been one of many vociferous critics of the law. Some of his work as a historian has been well-received, incuding a 1981 book on the Red Army which won a prize from the Académie Française. Much of his work has been steeped in the racist ideology of the far-right, apologising for the pro-Hitler regime in Vichy in the Second World war and warning of conspiracies to destroy European civilisation and to swamp the white race.


Note how similar Venner's paranoia was to that which we hear from American Christofascists and Tea Party members.  Are we seeing mental illness on display on a broad scale?