The True Ugly Face of Religion 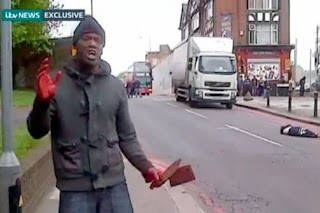 Yesterday we saw Islamic barbarism in London.  Last weekend we saw what was likely the result of Christofascist barbarism when a gay man was shot to death in New York City's West Village.   Clerics of both religions preach hate and violence.  Muslim leaders in the United Kingdom are thankfully speaking out against yesterday's barbaric murder in London.  But here in America hate merchants like E.W. Jackson, Republican nominee for Lt. Governor refuses to apologize for his extremist rhetoric.  Sadly, few Christian leaders have denounced Jackson.  The bigger question for adherents of both religions is what will they do beside talk?  Will they confront jihadists and extremists like Jackson?  Will they go on an offensive against their foul co-coreligionists?  Or will they act like the "good Germans"  and after perhaps a few words yield the field to the hate merchants?  My money is unfortunately on the latter.  It's a cynical view, but realistic when one looks at the fruits of both Christianity and Islam over the centuries: wars of religin, endless bloodshed, hatred and persecution of others.  Yesterday's murder victim is just the latest death in the countless millions who have died because of hate based religious belief.    Andrew Sullivan summarizes yesterday's horror in London:

The monster who paraded around on the street after hacking a soldier to pieces is chilling in many ways. But everything points to a religious act of terror, motivated by the same Jihadist rage that captured the Tsarnaev brothers. For these men, “our land” is not Britain; it is the land of Islam in their minds.  .  .  .  .   this was a religious sacrificial murder, authorized by God in the eyes of the killers.

Sadly, Andrew fails to acknowledge that hatred is not unique to Islam.  Here in Virginia the GOP has just nominated a trio of hate merchants motivated by religious fervor.  The face of E. W. Jackson below is different from the London murderers only by degree.  In both instances, the poison of religion is what powers the hatred and language that fuels violence.  Huffington Post looks at Jackson's refusal to rescind and of his awful statements:

The Virginia Republican Party took a post-convention victory lap on Tuesday in a parking lot outside gubernatorial candidate Ken Cuccinelli's headquarters. While the gatherers had come to propel the top of the ticket to a November victory, it was Cuccinelli's newly minted sidekick who stole the show.

Jackson made no attempt to soften the edges on Tuesday, despite whispers from Virginia Republicans that his selection may doom Cuccinelli's chances. Instead, Jackson charged forward with gusto.

"I don't have anything to rephrase or to apologize for," Jackson told reporters.

For those new to the blog, here are a few of the statements that Jackson feels no need to apologize for:

E.W. Jackson: Gay People Are "Perverted" And "Very Sick." In October 2012, Right Wing Watch reported about E.W. Jackson's appearance on a radio show with Peter LaBarbera and John Kirkwood. Jackson said about gays and lesbians: "Their minds are perverted, they're frankly very sick people psychologically, mentally and emotionally and they see everything through the lens of homosexuality. When they talk about love they're not talking about love, they're talking about homosexual sex. So they can't see clearly." [Right Wing Watch, 10/25/12]

E.W. Jackson: Gays And Lesbians "Want To Destroy" Culture; Said They Were Forcing Christians To Change Their Beliefs. In October 2012, Right Wing Watch reported about E.W. Jackson's appearance on a radio show with Peter LaBarbera and John Kirkwood. Jackson said of homosexuality: "They've got to transform the culture in order to make their lifestyles fully acceptable to everyone. I used two words to describe what they're trying to do: authoritarian and totalitarian, and I believe that. I believe that they are of a mindset that says we want to destroy in any way we need to anyone who dares oppose this agenda, that's a very, very dangerous approach.

Will there be some that take this rhetoric to heart and act?  Words can and do have consequences.