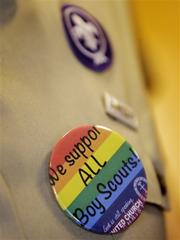 While it's better than nothing, the Boy Scouts of America adopted a half measure yesterday and will now allow openly gay boys and youth to be members of the Boy Scouts.  Unfortunately, once they reach the age of majority they apparently turn into predators and/or bad role models and can no longer remain or move on to leadership positions.  Naturally, a few selective passages of the Bible are cited as justification for this continued discrimination.  A friend on Facebook noted the hypocrisy of the BSA leadership:

Leviticus 19:19: "Do not wear clothing woven of two kinds of material."    Looked at my old scouting uniform. The composition? 65% polyester, 35% cotton.

The Virginian Pilot reports on the policy change which was hysterically opposed by the usual anti-gay hate groups that uses anti-gay propaganda as one of their largest fundraising tools now that abortion isn't the cash cow for them that it used to be.  Here are some story highlights:

After lengthy and wrenching debate, local leaders of the Boy Scouts of America have voted to open their ranks to openly gay boys for the first time, but heated reactions from the left and right made clear that the BSA's controversies are far from over.

The Scouts' longstanding ban on gay adults remains in force, and many liberal Scout leaders - as well as gay-rights groups - plan to continue pressing for an end to that exclusion even though the BSA's top officials aren't ready for that step.

Meanwhile, many conservatives within the Scouts are distraught at the outcome of the vote and some are threatening to defect. A meeting is planned for next month to discuss formation of a new organization for boys.

The vote was conducted by secret ballot Thursday during the National Council's annual meeting at conference center not far from Boy Scout headquarters in suburban Dallas. Of the roughly 1,400 voting members of the council who cast ballots, 61 percent supported the proposal drafted by the governing Executive Committee. The policy change takes effect Jan. 1.

"We are deeply saddened," said Frank Page, president of the Southern Baptist Convention's executive committee. "Homosexual behavior is incompatible with the principles enshrined in the Scout oath and Scout law."

The Assemblies of God said the policy change "will lead to a mass exodus from the Boy Scout program." It also warned that the change would make the BSA vulnerable to lawsuits seeking to end the ban on gay adults.

Pascal Tessier, an openly gay 16-year-old Boy Scout from Maryland, had mixed emotions after the vote.  "I was thinking that today could be my last day as a Boy Scout," he said. "Obviously, for gay Scouts like me, this vote is life-changing."

Tessier is on track to receive his Eagle Scout award - he only needs to complete his final project - but said he is troubled that on his 18th birthday he could transform from someone holding Scouting's highest rank to someone unfit to be a part of the organization.  "That one couple hours (between 17 and 18) will make me not a good person," he said.

While the Southern Baptists were clearly upset by the vote to accept openly gay youth, the Utah-based Mormon church - which has more Scouting troops than any other religious denomination - reacted positively.  "We trust that BSA will implement and administer the approved policy in an appropriate and effective manner," an LDS statement said.  Utah's largest Boy Scout councils supported the change.

Hypocrisy - and of course hatred of others which is apparently based on some sick need to feel superior over others - remains the main attribute of today's modern day "godly Christians" who remain in anti-gay denominations.  My activist friend Wayne Besen summed it up well:

Today’s Boy Scout’s decision was insulting and pandered to ignorance and bigotry at the expense of  gay people and their families. Allowing gay scouts but not adult scout leaders was a compromise – only in the sense that BSA compromised its integrity and decency. Let’s be clear — this was not a step forward, but a step backward, because it reinforced the most vile stereotypes and misconceptions deliberately peddled by anti-gay activists.

Today’s decision was degrading, dehumanizing, and disgraceful. It stigmatized LGBT people and their families and sends the dangerous message that they are inferior and a threat to society.

The new policy continues to tarnish the organization’s image . . . . Homosexuality is not a moral issue, but a natural expression of who some people are. However, bigotry is a moral issue – one which places the BSA on the wrong side of history.