Just How Extreme is the Virginia GOP Slate for 2013? They Are Down Right Insane

In a post this morning this blog noted that the Republican Party nominated the most extreme slate in Virginia history for its 2013 statewide ticket.  Ken Cuccinelli has already shown himself to be a ultra far right  nutcase who seeks to restore the sodomy laws, end all abortions regardless of the circumstances and restrict minority voting rights.  What's frightening is that Cuccinelli - or Kookinelli - may be the sanest of the trio nominated yesterday.  By far the most batshit crazy is Lt. Governor nominee Bishop E. W. Jackson.  The man belongs in an insane asylum and his hatred for gays makes Kookinelli's pale in comparison.  Blue Virginia has compiled some of Jackson's positions:


E.W. Jackson Would "Permanently Defund Planned Parenthood." According to his website, E.W. Jackson said he sought to "permanently defund Planned Parenthood," saying: "It is an act of grave injustice to force citizens to pay for the destruction of unborn babies, whether through state or federal taxes. All funding for abortion and the organizations that provide them must be halted." [Jackson for Lieutenant Governor, accessed 5/18/13].

E.W. Jackson: Gay People Are "Perverted" And "Very Sick." In October 2012, Right Wing Watch reported about E.W. Jackson's appearance on a radio show with Peter LaBarbera and John Kirkwood. Jackson said about gays and lesbians: "Their minds are perverted, they're frankly very sick people psychologically, mentally and emotionally and they see everything through the lens of homosexuality. When they talk about love they're not talking about love, they're talking about homosexual sex. So they can't see clearly." [Right Wing Watch, 10/25/12]

E.W. Jackson: Gays And Lesbians "Want To Destroy" Culture; Said They Were Forcing Christians To Change Their Beliefs. In October 2012, Right Wing Watch reported about E.W. Jackson's appearance on a radio show with Peter LaBarbera and John Kirkwood. Jackson said of homosexuality: "They've got to transform the culture in order to make their lifestyles fully acceptable to everyone. I used two words to describe what they're trying to do: authoritarian and totalitarian, and I believe that. I believe that they are of a mindset that says we want to destroy in any way we need to anyone who dares oppose this agenda, that's a very, very dangerous approach.

One can only wonder what sane Republicans to the extent there are any left will think when they realize just how insane and how extreme Jackson is in his views and beliefs. 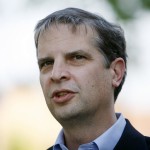 Meanwhile, Attorney General nominee  Mark Obenshain is less obsessed with gay hating than Jackson, but he ought to terrify every woman in Virginia.  Here are highlights of two of Obenshain's postions:

Obenshain Co-Patroned "Personhood" Bill With Cuccinelli. Obenshain has repeatedly supported "personhood" legislation that would outlaw all abortion and many common forms of birth control. [HB2797, 2007; HB1, 2/23/12]

Obenshain Introduced Bill Requiring Women to Report Miscarriages to the Police
In 2009, Sen. Mark Obenshain introduced legislation that would require women to report miscarriages to the police within 24 hours or face a Class 1 misdemeanor. According to the Virginia Legislative Information System, the bill "Requires that when a fetal death occurs without medical attendance upon the mother at or after the delivery or abortion, the mother or someone acting on her behalf, within 24 hours, report the fetal death, location of the remains, and identity of the mother to the local or state police or sheriff's department of the city or county where the fetal death occurred. The bill also specifies that no one shall remove, destroy, or otherwise dispose of any remains without the express authorization of law-enforcement officials or the medical examiner, and that a violation of this section is a Class 1 misdemeanor." [SB 962, 2009]

Obenshain Co-sponsored Restrictive Voter ID Bill. In 2013 Obenshain sponsored a bill requiring photo identification. Acceptable forms of ID include a government-issued photo ID that includes their address, a photo ID from a Virginia college or university, or a workplace ID featuring a photo.  Regular Voter ID cards would not be sufficient.

Too many Virginians have refused in the past to understand that the Republican Party that they or their parents grew up is dead and gone.  It has been replaced by a party controlled first and foremost by Christian extremists and those who would trample on the rights of other citizens.  The party of logic and reason and small government is dead.  Today's GOP wants to micro manage everyone's sex life and inflict extreme religious beliefs on all citizens.