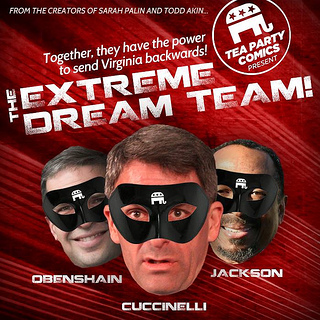 As Blue Virginia is reporting, Terry McAuliffe, Democrat gubernatorial nominee apparent has condemned the extreme anti-gay statements of both his opponent, Ken "Kookinelli' Cuccinelli and the truly mentally disturbed GOP candidate for Lt. Governor, E. W. Jackson.  As previously noted, until nominated by The Family Foundation and other theocratic types   the Virginia GOP at the Republican convention last weekend, Jackson was best known for providing a black face for anti-gay hate groups  such as FRC and NOM.  In the U. S. Senate priamry last year, Jackson garnered only 5% of the primary vote.   Here are highlights from Blue Virginia:

Terry McAuliffe's campaign denounced the extreme anti-gay rhetoric of Ken Cuccinelli and E.W. Jackson on Wednesday, saying the attacks “do not represent Virginia values and have no place in political discourse.” The statement is in response to numerous anti-gay comments by Republican gubernatorial candidate Ken Cuccinelli and newly-nominated Lieutenant Governor candidate E.W. Jackson, such as Cuccinelli's remark that the "homosexual agenda" brings "nothing but self-destruction, not only physically but of their soul.

McAuliffe spokesman Josh Schwerin stated, “While we can have earnest disagreements about public policy issues, the manner in which Ken Cuccinelli and E.W. Jackson have demonized fellow Virginians who happen to be gay is divisive, dangerous and is damaging to the Commonwealth.”

Schwerin added, “While Terry McAuliffe is focused on important issues like growing Virginia’s economy and creating jobs, Ken Cuccinelli and E.W. Jackson have focused much of their careers on waging divisive, social battles, that will alienate mainstream Virginians, and deter families and businesses from locating in the Commonwealth."
The statements from Cuccinelli and Jackson have drawn heavy scrutiny from across the political spectrum, including Republican Lieutenant Governor Bill Bolling, who said Jackson’s anti-gay statements were “indefensible.”

The piece also has a summary of the anti-gay venom and hate previously spewed by Kookinelli and Jackson.   If Democrats - e.g. women, gays, blacks and rational people do not turn out in November, I shudder to contemplate what these hate filled three stooges might do to Virginia.