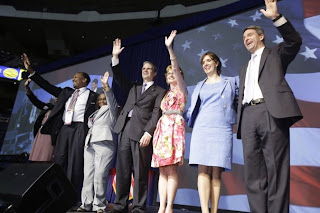 The blow back from the Virginia GOP's nomination of three extremists for its statewide ticket in 2013 continues not only on LGBT sites and blogs but more and more in the mainstream media.  Cuccinelli, Jackson and Obenshain may be the darlings of the religious zealots at The Family Foundation, but even to sane Republicans (to the extent there are any left) the triumvirate of lunatics is troubling.   A case in point?  Jennifer Rubin, not one of my favorite conservatives, slams the Virginia GOP in a new column in the Washington Post.  The real risk that the Virginia GOP faces is that Jackson's utter lunacy will draw attention to the fact that gubernatorial nominee, Ken Cuccinelli believes much of the same things as Jackson.  He's merely been a little bit more discrete in his rantings.   Here are some column excerpts:

The Virginia Republican Party was already taking a risk, dumping a gubernatorial primary election in favor of a convention, in order to assure the ideologically emphatic Attorney General Ken Cuccinelli II the nomination. Then on Saturday, a small turnout of party die-hards picked a nominee for lieutenant governor who is nothing short of outrageous.

African American lawyer-turned preacher E.W. Jackson has called gays “perverted” and “very sick people psychologically, mentally and emotionally.” He has said the president has “Muslim sensibilities.” He has compared Planned Parenthood to the KKK. He previously got less than 5 percent of the vote in the GOP primary for U.S. Senate in 2012. He is by any definition an extremist, someone who could not muster even minimal support from GOP primary voters.

And this is the No.2 man on the ticket, with whom Cuccinelli is now campaigning on a 10-city tour of the state. You can be sure that his opponent will be taking footage to be used in ads linking Cuccinelli with Jackson’s language and view.

Cuccinelli has already told The Post, “I am just not going to defend my running mates’ statements at every turn. They’ve got to explain those themselves. Part of this process is just letting Virginia voters get comfortable with us, on an individual basis, personally.” But politics is never that simple.

Cuccinelli is a staunch social conservative who was already going to have an uphill climb with moderate voters. But he has never dabbled in the sort of egregious language Jackson has used. He’s now going to have to walk a thin line, signaling to his supporters that his own views haven’t changed but also reassuring voters he’s not a gay-hater or conspiracy monger. You can be sure that Terry McAuliffe’s campaign will try to obliterate such distinctions.

Some Republicans in the state are already nervous. One state GOP insider e-mailed me, almost despondent.

Jackson’s nomination may hurt Cuccinelli in a number of ways. It will heighten turnout among the Democratic base (previously unenthusiastic about the race). It will turn attention back to social issues, not where Cuccinelli will win over moderate voters. And it will increase the perception that Cuccinelli is himself ideologically extreme, a concern for the campaign even before the Jackson nomination.

To overcome these, Cuccinelli will need to advance a meaty agenda and show a discipline that he’s not yet demonstrated. The race will be competitive, but the Dems just caught a lucky break.

Cuccinelli wanted a convention to make sure he'd win the nomination for governor and to keep his supporters at The Family Foundation - an affiliate of national hate groups happy.

Speaking with McAuliffe staffers, yes they are thrilled about Jackson's nomination and the opening it provides to pound Cuccinelli on social issues.