Father Marcial Maciel And The Popes Who Protected Him 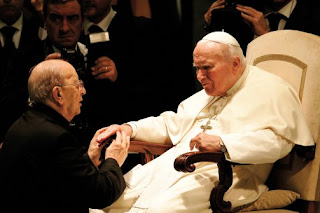 By now the worldwide pattern of sexual abuse of children and minors by Catholic Church clergy is all to well known: wanton abuse followed by superiors who engaged in cover ups and allowed the abuse to continue, often in a new unsuspecting venue.  What is unusual and shocking about the wanton sexual abuse perpetrated by Marcial Maciel Degollado, the founder of the Legion of Christ, is that his protectors were none other that Pope John Paul II and Benedict XVI.  While Benedict XVI was ultimately forced to act against Maciel because the volume of evidence could no longer be covered up, he waited many years after it had become clear that Maciel was a dangerous predator.  A piece in The Daily Beast looks at this horrible picture of abuse and cover up motivated in part by the Catholic Church's true god: money and Maciel's ability to raise it in large quantities.  Here are some story excerpts:

Marcial Maciel Degollado, a priest from Mexico with an extravagant name, was the greatest fundraiser for the postwar Catholic Church and equally its greatest criminal.


“A life ... out of moral bounds,” is how Pope Benedict XVI described Maciel in a 2010 interview, two years after Maciel’s death. A “wasted, twisted life.”

And a life that exposed shocking flaws in the Vatican and the papacy. The saga of Father Maciel opens a rare view onto the flow of money in the Roman Curia across the last half century, a time during which his rise to power and late-life crash into scandal stained the campaign for John Paul II’s sainthood and became a quagmire for Benedict XVI.

In the late 1940s, Maciel began sexually plundering teenage seminarians in the religious order he founded, the Legion of Christ. He also shuttled between Mexico, Venezuela, and Spain, courting benefactors like a senator with silk between the fingers, portraying his Legionaries as a force of resurgent orthodoxy, himself a fearless foe of communism.

That message had booming resonance in Mexico, a heavily Catholic country seared by memories of lethal anticlerical persecutions set in motion by the Calles regime in the 1930s, a milieu powerfully evoked in Graham Greene’s novel The Power and the Glory. Maciel won government support for seminary scholarships in Madrid, after the Spanish Civil War cemented ties between Francisco Franco’s dictatorship and the Catholic hierarchy. Wealthy industrialists and patricians from the Spanish-speaking world poured money into Maciel’s fledgling order.


Legionaries called their leader Nuestro Padre (Our Father). They were taught that their founder was a living saint. They took private vows, swearing never to criticize Maciel or their superiors and to report on anyone who did. The cultlike insular culture Maciel molded would reward spying as an act of faith and shield Nuestro Padre from scrutiny as the youngest victims grew up and left the order, returning to Mexico and years of grappling with his traumatic impact on their lives.

In 1956 at the Legion seminary in Rome, Maciel spun out of control from an addiction to a morphine painkiller. A priest and older seminarian complained to the Vatican, which prompted an investigation that sent Maciel to a hospital briefly and removed him as superior general. But with no public notice of his suspension, Maciel kept traveling, raising money to complete construction on Our Lady of Guadalupe Basilica in Rome. His victims, bound by the private vows, lied to defend him, as they would admit in interviews many years later.

In 1976 Vaca bolted to the Long Island diocese of Rockville Centre. He wrote a 12-page single-spaced letter to Maciel, identifying 20 other victims, “good and gifted young boys ... [subjected to] aberrant and sacrilegious abuse.” Bishop John Raymond McGann included Vaca’s letter in a dossier to the Vatican suggesting that it investigate. The letter was acknowledged; nothing happened. The bishop and Vaca wrote again in 1978, when John Paul II became pope.


In 1989 Vaca sent a long, detailed letter to John Paul in a dossier from his Long Island diocese, via Vatican diplomatic pouch, again including his original statement naming Maciel’s victims. This time he wrote more directly, telling John Paul that because of the abuse, he never should have been ordained. He was about to marry and wanted release from his vows. Several years later Cardinal Joseph Ratzinger sent a document granting that, but on the Maciel charges—again, nothing.

As Legion money flowed through the Curia, seminarians drove across Rome in the days before Christmas, delivering baskets with fine wines and $1,000 Spanish hams to favored officials.

Barba, Vaca, and others found their way to me. Meanwhile, Gerald Renner of The Hartford Courant was reporting on men leaving a Legion seminary—an environment they found overly repressive—in Connecticut. Renner and I connected for a joint Courant assignment. The February 23, 1997, report exposed a history of pedophilia by Maciel through nine victims on the record. The Vatican refused comment. Maciel claimed innocence, but refused to be interviewed. The Legion counterattacked with a website denouncing the accusers as fomenting a conspiracy against Maciel.


At that point the Vatican, which had known about the daughter for four and a half years, announced an investigation of the Legion. In 2010 the Vatican took the scandal-battered order into receivership, something unique in the modern church. Benedict appointed a delegate (read: overseer), Cardinal Velasio de Paolis, a canon lawyer with a background in economics. Among his first duties, after the pope ordered the abolition of the private vows, was to rewrite the Legion’s constitution.

But by then, John Paul’s denial and Benedict’s soft-glove punishment became a liability as information began surfacing.

Why didn’t the Vatican release all the information on Maciel in 2006, when Benedict sent him off to a life of penance? Barba, who filed a 1998 case seeking Maciel’s ouster and has become a news celebrity in Mexico with his forceful analysis of breaking information, is convinced that Ratzinger, after becoming pope, wanted to minimize the damage done by John Paul’s failure, knowing Rome would push to make John Paul a saint. In spring 2011 Benedict beatified John Paul, the step before sainthood. It would be a dicey move for the next pope to take the final step. When Benedict flew to Mexico in spring 2012, he faced damaging media coverage for his failure to meet with Maciel’s victims. As long as those men live, any movement on the story of John Paul’s sainthood should be balanced with the reality of those, like Barba and Vaca, who sent John Paul all the messages he needed, but that he failed to heed, choosing instead to bless the myth of Nuestro Padre.