While the far right elements that help orchestrate CPAC gatherings have managed to exclude homocon groups and dis-invite politicians like Chris Christie and Bob McDonnell who have accepted the reality that tax increases are needed to rebuild a crumbling infrastructure, some on the scene at CPAC believe that the death grip of the Christofascists on the Republican Party may be in trouble.  If true, it would be a positive sign for both the GOP and the nation as a whole.  For too long the Christian Taliban has been controlling the GOP on social issues and been a bar to progressive change.  A column in Daily Kos sets out some observations.  Here are highlights:

Already, one thing stands out: The Republican Party faces a devastating problem among young people.

If anything, the problems of the party with respect to converting young Americans has been understated, and it is not a mere question of demographics, but of principles. A young libertarian moderator of a discussion titled The Future of the Movement rattled off polling statistics on how the newest voting generation is fiscally conservative, but socially liberal; more to the point, even the young conservatives at the political action conference whose very theme is, ostensibly, "the next generation of conservatives" seem to fall enthusiastically in the same camp.

[T]here is little to no stomach anywhere here for the fight against gay marriage. There seems little stomach for very much of the social conservative platform, here—excepting, perhaps, abortion, but even on that the stated focus by many younger and older speakers is that it should not be "litigated" through the courts but reduced through social activism. From Dick Morris to the college conservatives to the Rand Paul fans to Jennifer Rubin, etc., the feeling is afoot that the party must change its message, and social issues are where that change needs to take place.

Still, acceptance of that apparent necessity is strongly generational. If it were up to the younger half of the crowd, Rand Paul's version of libertarianism conservatism or conservative-ish libertarians would be the dominant GOP position, period. Since they are young and the older generation is, well, not, they are likely to get their wish. It will be slow going, however; the future of the party is not the present of the party, and the present power brokers of the party, the forty-somethings and fifty-somethings and sixty-somethings that run the party now have little interest in giving up those things. Those things motivate the older voters, and they need older voters. But they do not talk about them as much, and they talk about them in much more roundabout terms, perhaps, than they once did, because being a rigid social conservative now also carries a price, too, and it is the youngest voters in both parties who are now extracting it. You can see it in gay marriage; you can see it in the uneasy, shifting immigration stances; you can see it in a conference that speaks of religion, .  .  .  .

It is suddenly quite clear why the current conservative movement is obsessed with taxes and deficits to the near-exclusion of all other topics: those are the only topics they can agree on.  .  .  .  You want to get the crowd going, you talk about cutting taxes and cutting the federal government, any part of the federal government, wide swaths of government—but mention a social issue (gay marriage, immigration, issues of crime and punishment) and you are on thinner ice. So taxes and government spending it is.

There is a danger here, for Republicans, and certainly rougher waters than they have been used to. In any event, the gay marriage "issue" is not long for this world, and a profound shift in the party's hardline immigration stance may not be far behind. Other shifts may soon follow. On anything but fiscal issues and raw, jingling nationalism, the Republican Party may find their new base cutting out from under them.

[Young libertarians] . . . their presence demonstrates that whatever the older base's mood, it is the fiscal-not-social crowd that is most intent on holding the reins in the next generation. It is only a question of timing, of the relative steering power of the two groups, younger vs. older, and of how enthused or standoffish the younger group chooses to be when voting in the all-important primaries that flatly decide these things. Also: will there even be enough of them to make a difference? That is less clear.

Here is an image from NOM's anti-gay panel - it's not exactly a full house, but I am sure NOM will try to spin it otherwise: 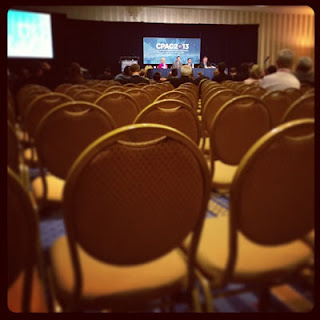