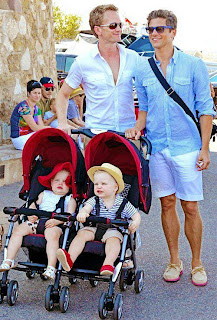 I often remark that no one lies as consistently and deliberately as the "godly Christian" crowd.  If their lips are moving it's a safe bet they are lying.  A corollary to this rule is that no one deliberately falsifies research and studies as consistently and deliberately as the Christianist crowd.  Furthering their poisonous agenda justifies any and every act of deceit and dishonesty.  A case in point is the flawed "gay parenting study" conducted by sociology professor Mark Regnerus which in point of fact never really looked at children actually raised in gay headed families but instead tied children of gays with unstable broken homes.  And now we know that the entire study was prepared with a goal of having "research" to use against LGBT citizens in upcoming court cases, including those now pending before the U. S. Supreme Court.  The American Independent breaks the story via Huffington Post.  My growing contempt for these people appears justified once again.  Here are article highlights:

WASHINGTON -- The conservative funders who bankrolled a flawed and widely cited academic study that's critical of gay marriage choreographed its release in time to influence “major decisions of the Supreme Court,” documents show.

The documents, recently obtained through public-records requests by The American Independent and published in collaboration with The Huffington Post, show that the Witherspoon Institute recruited a professor from a major university to carry out a study that was designed to manipulate public policy. In communicating with donors about the research project, Witherspoon’s president clearly expected results unfavorable to the gay-marriage movement.

The think tank’s efforts paid off. The New Family Structures Study came out just in time for opponents of gay marriage to cite it in multiple federal cases involving marriage equality – including two cases soon to be decided by the U.S. Supreme Court.

James Wright, editor of Social Science Research, which published the study’s findings last summer, said he was not aware of the funders’ intentions to use his academic journal to sway the Supreme Court.

Records show that an academic consultant hired by UT to conduct data analysis for the project was a longtime fellow of the Witherspoon Institute, which shelled out about $700,000 for the research. Documentation about University of Virginia associate sociology professor W. Bradford Wilcox’s dual roles contradict Regnerus’ assertions that the think tank wasn’t involved with how the study was designed or carried out.

Religious right groups such as the Witherspoon Institute have for years been challenging the legality of gay marriage on all fronts and trying to amass data that that can be used to sway the public, lawmakers, and the courts to their side of the debate. Groups seeking to block gay marriage have been eager to use Regnerus’ study – and even further twist his findings – as evidence that gay parents are inferior to straight parents.

The United States Conference of Catholic Bishops recently filed a “friend of the court” brief in Perry, arguing that, “A mother and father each bring something unique and irreplaceable to child-rearing that the other cannot.” The brief said that Regnerus’ study found “that children raised by married biological parents fared better in a range of significant outcomes than children raised in same-sex households.”

But the term “same-sex households” is misleading. The study effectively compared families with two always-married straight parents to some families who only had one parent but were characterized as households headed by gay fathers or lesbian mothers.

Regnerus’ own professional organization, the American Sociological Association, recently filed an amicus brief in Hollingsworth v. Perry, arguing that his study “provides no support for the conclusions that same-sex parents are inferior parents or that the children of same-sex parents experience worse outcomes.”

Jennifer C. Pizer, senior counsel and director of the Law and Policy Project at the LGBT-rights legal advocacy group Lambda Legal, said she is not surprised to learn that the study’s funders had an agenda when financing this research. But what is more important, she said, is that the study is being used to support conclusions it did not find.

In the early stages of the New Family Structures Study – before data was collected and long before any results were known – the Witherspoon Institute’s president, Luis Tellez, made it clear to Regnerus that expediency was paramount.

In his letter, Tellez asked the foundation for $200,000 more to go toward the New Family Structures research. In his request he noted the urgency of getting the study published – before the data had even been collected.

Many critics of the New Family Structures Study have raised questions about the speed with which Regnerus’ paper’ was published in Social Science Research.

The study was submitted for publication in early February 2012, before Regnerus’ team had finished collecting all of the data. The paper was accepted for publication about six weeks later, in mid-March. By contrast, some of the other articles published in the same issue of Social Science Research took a year between submission and acceptance.

“One of the things about academic publishing is that it’s not in a hurry,” Rosenfeld said. “It’s more important to get it right than to rush it into print. So, I was sort of perplexed as to what the hurry was about.”  Rosenfeld said he agreed to review the paper on the condition that he could see the data. But Regnerus’ team refused.

In an email dated Dec. 2, 2010, Regnerus revealed to Goldberg that the Witherspoon Institute had already anticipated what the results would be – that previous studies showing favorable outcomes for children raised by same-sex parents were wrong.

There is much more in the article but one thing becomes clear.  The "research" was rigged to support a preordained conclusion and it was intended to be insidiously used to smear gay parents.  These "godly Christian" folk are nothing short of evil and dishonest.