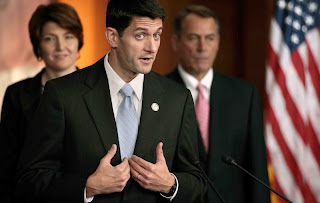 In yet another display of Paul Ryan's glaring disingenuousness - and his desire to dupe the cretins in the GOP base - a new analysis of his budget proposal indicates that it assumes the complete repeal of Obamacare except all provisions that raise taxes.  Oh, and did I mention, it continues the Medicare cuts he and Mitt Romney whined about during the 2012 campaign?  That's right, cut all the parts of the Affordable Health Care that involves paying for benefits for Americans, but keep every tax increase written into the law and keep the Medicare cuts.  Naturally, the drooling, knuckle draggers in the GOP base will only hear the "repeal Obamacare"  portion of Ryan's message while they pay more in taxes with zero corresponding public benefits.  Which is exactly what Ryan apparently hopes for.  A piece in the Washington Post looks at Ryan's con job.  Here are highlights:

Every Ryan budget since the passage of Obamacare has assumed the repeal of Obamacare. Kinda. Ryan’s version of repeal means getting rid of all the parts that spend money to give people health insurance but keeping the tax increases and the Medicare cuts that pays for that health insurance, as without those policies, it is very, very difficult for Ryan to hit his deficit-reduction targets.

Ryan has also said he’ll use the new revenue baseline as the basis for his revenue-neutral tax reform plan — that means including both the tax increases of the Affordable Care Act and the “fiscal cliff” deal.

That’s the irony of Ryan’s balanced-budget. Much of it is built on taxes and Medicare cuts that he and his party would never have proposed, and which they in fact fought bitterly, but which they’ve now assimilated into their budget because it’s almost impossible for them to hit their deficit-reduction goals otherwise.