An Unholy Alliance Against Stopping Violence Against Women: The Vatican, Iran and Russia 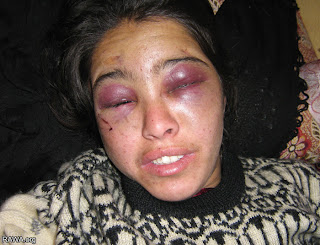 As the conclave to elect the next Pope begins today in Rome it is likely than yet another anti-woman misogynist will be selected.  But it is not just within the Church itself that the Catholic hierarchy is spreading its poison.  And it has some pretty scary allies in its quest to hold back women's rights and to block laws and treaties that would bar violence against women.  One Vatican ally in particular speaks volumes about the sickness in Rome: Iran.  Iran, a repressive nation that by reports uses the death penalty against dissidents and others with regularity.  An editorial in the New York Times looks at the unholy alliance against women.  Here are excerpts:

Some horrific events over the past few months, including the shooting of a Pakistani schoolgirl and the rape and murder of a young Indian physiotherapy student, should have been an alert for the world to unite in preventing violence against women.


But if a conference now under way at the United Nations is any guide, that message has not resounded with the necessary urgency. Halfway into their two-week annual meeting, delegates to the Commission on the Status of Women fear they will not be able to agree on a final communiqué, just like last year.

Who is to blame? Delegates and activists are pointing fingers at the Vatican, Iran and Russia for trying to eliminate language in a draft communiqué asserting that the familiar excuses — religion, custom, tradition — cannot be used by governments to duck their obligation to eliminate violence.

Conservative hard-liners seem determined to fight it out again. They have also objected to references to abortion rights, as well as language suggesting that rape also includes forcible behavior by a woman’s husband or partner. Poland, Egypt, other Muslim states and conservative American Christian groups have criticized one or more parts of the draft. The efforts by the Vatican and Iran to control women are well known. It is not clear what motivates Russia, although there is a strong antifeminist strain in President Vladimir V. Putin’s government. He may also be trying to curry favor with Islamic states.

In any case, the suggestion that traditional values justify the violation of basic human rights is spurious.

Gender-based violence is an epidemic. A World Bank report estimated that more women between the ages of 15 and 44 were at risk from rape and domestic violence than from cancer, car accidents, war and malaria combined. According to the United Nations and other sources, more than 600 million women live in countries where domestic violence is not considered a crime and more than 3 million girls are facing female genital mutilation. Women in all social, economic, ethnic and religious groups are affected. The conference will be a failure if it cannot produce ambitious global standards that will deliver concrete results to protect women and girls.

And as so often seems to be the case, behind the horrors against women one finds religion - especially fundamentalist religion, a toxic and evil force in the world.  The image above is but an example of what male dominated religions permit, if not encourage.  It's ugly and evil.  The world would likely be a far better place if these religions ceased to exist.