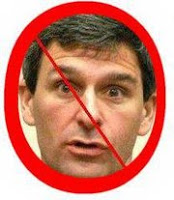 As the Virginian Pilot is reporting, apparently not all Republicans in Virginia are drinking the Kool-Aid being ladled out by the Christofascists at The Family Foundation and the objective reality denying Tea Party crowd who are near orgasmic at the prospect of Ken "Kookinelli" Cuccinelli, a/k/a "Cuckoo" as the GOP nominee for Governor of Virginia.  Three former GOP members of the Virginia General Assembly have come out and endorsed Terry McAuliffe, the presumed Democrat nominee, for governor over Kookinelli.  There reason:  Kookinelli and his crowd are simply too far right and extreme.  Here are article highlights:

Two former Northern Virginia Republican delegates, and another from Richmond, have come out in support of Democratic gubernatorial candidate Terry McAuliffe.

They include Del. Vince Callahan Jr., who served 40 years in the General Assembly, and Del. Jim Dillard, both of Fairfax, as well as Del. Katherine Waddell from the Richmond area, a onetime GOP member who won election to the House in 2005 as an independent.

In statements released by the campaign, Callahan said he's supporting McAuliffe because Virginia must get away from partisan and ideological battles and "needs a Governor who will promote a mainstream agenda that focuses on the economy and making Virginia better for business."

"Virginians are fed up with right wing extremism and divisive ideology, we need a Governor who will focus on mainstream economic issues," added Waddell, who now serves as president of the Women's Strike Force political action committee to defend abortion rights.  "Terry McAuliffe will do what is right for Virginia," she said.