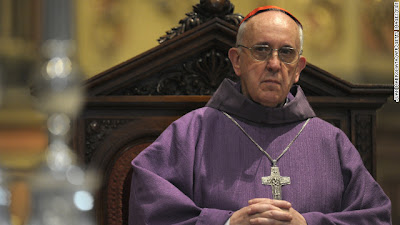 It would appear that those who were hoping for change in the Roman Catholic Church and in particular a cessation of its anti-gay jihad have received a punch in the gut by the prissy, bitter old men of the conclave who have selected Argentinian Cardinal Jorge Mario Bergoglio as the new pope.  Back when Argentina was considering adoption of gay marriage, the new pontiff had this to say about gay marriage and gay parenting, as if, of course, he had any real experience in either one:

Bergoglio began “I write these lines to each of you who are in the four monasteries of Buenos Aires. The people of Argentina will face in the coming weeks, a situation whose outcome may seriously injure the family. This is the bill on marriage for same sex. “

Then he added, “At stake are the lives of many children who are discriminated against in advance by depriving them of human growth that God wanted to given with a father and a mother. At stake is a total rejection of the law of God, engraved in our hearts as well”.

The Archbishop stated flatly “we are not naive: it is not just a political struggle is a destructive attempt to God’s plan. It is not just a bill (this is only the instrument) but a ‘move’ from the Father of Lies that seeks to confuse and deceive the children of God."

This fun aside from  USA Today:
[Bergoglio] Couldn't prevent Argentina from becoming the first Latin American country to legalize same-sex marriage or stop its president, Cristina Fernandez, from promoting free contraception and artificial insemination. When Bergoglio argued that gay adoptions discriminate against children, Fernandez compared his tone to "medieval times and the Inquisition."
In the run up to the conclave, The National Catholic Reporter summed up why Bergoglio might be attractive to the bitter old men in the college of cardinals:

The case for Bergoglio in 2013 rests on four points.

First and most basically, he had strong support last time around, and some cardinals may think that they're getting another bite at the apple now.

Second, Bergoglio is a candidates who brings together the first world and the developing world in his own person. He's a Latin American with Italian roots, who studied in Germany. As a Jesuit he's a member of a truly international religious community, and his ties to Comunione e Liberazione make him part of another global network.

Third, Bergoglio still has appeal across the usual divides in the church, drawing respect from both conservatives and moderates for his keen pastoral sense, his intelligence, and his personal modesty. He's also seen as a genuinely spiritual soul, and a man of deep prayer.

"Only someone who has encountered mercy, who has been caressed by the tenderness of mercy, is happy and comfortable with the Lord," Bergoglio said in 2001. "I beg the theologians who are present not to turn me in to the Sant'Uffizio or the Inquisition; however, forcing things a bit, I dare to say that the privileged locus of the encounter is the caress of the mercy of Jesus Christ on my sin."

Apparently, in Bergoglio's book, mercy and the social gospel message don't extend to LGBT individuals.  Obviously, I won't be returning to the Roman Catholic Church.  And I suspect that as Pope Francis, Bergoglio will not be able to staunch the hemorrhaging of members of the Church in Europe, North America or South America.  Selecting a pope from South America does not make up for the Church's increasingly Medieval views of women, gays and modernity.