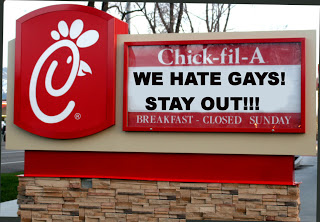 While Neanderthals and Christofascists may continue to support Chick-Fil-A's policy of funding anti-gay organizations, another major university has decided that it doesn't like Dan Cathy's style of bigotry and is dumping Chick-Fil-A from its food court.  No doubt some of the Christofascists will howl that "Christians are being persecuted" as they forget that freedom of speech and freedom of religion are two way streets.  Kudos to Emory University for sending Chick-Fil-A packing.  Here are highlights from Huffingon Post:

In the wake of its 2012 anti-gay media firestorm, Chick-fil-A has been removed from the food court at Emory University.

Think Progress points to a tweet from the Georgia-based university's campus newspaper Emory Wheel, which confirms the news but offers few details:

UPDATE: Chick-fil-a to be removed from Cox Hall this Summer as part of FACE's new Cox Hall layout.


Previously, the university's administration issued a Dec. 17 statement saying Chick-fil-A President Dan Cathy's confirmed donations to anti-gay organizations did not reflect the school's "values of access, inclusion and equity," according to the Georgia Voice. Still, the statement did not ask for the restaurant to be removed, according to the report.

Despite the administrators’ stance, lesbian, bisexual, gay and transgender (LGBT) students and allies continued to campaign against the restaurant.   Atlanta is also home to Chick-fil-A’s corporate headquarters.