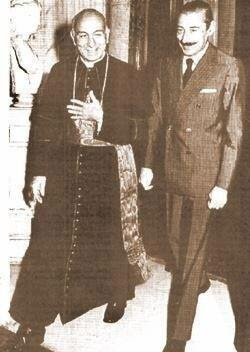 UPDATED 3-16-2013:  The questions about Francis' role in the "Dirty War" continues to have legs.  The Washington Post looks at the story here.

While much of the media continues to fawn over the newly elected Pope Francis I happily gulping down up the pablum dished out by the Vatican, some news outlets are continuing to focus on Francis I - then Jorge Bergogli's - role during Argentina's "Dirty War" when the military dictatorship kidnapped and murdered thousands of political opponents and their presumed supporters.   Apparently, the focus on Francis I's past actions that do not comport with the image the Vatican is trying to spin has hit some raw nerves in Rome.  As the Virginian Pilot reports, Vatican spokesman the Rev. Federico Lombardi has had a temper tantrum and is blaming calling such coverage "defamatory" and part of a "anti-clerical left-wing" campaign to discredit the new Pope.   One has to wonder why the bitter old men who elected Bergoglio pope had not considered this possible negative baggage before hand.  Particularly after having selected a former Hitler youth as pope in 2005.  A piece in Democracy Now looks at the lingering questions about events during the "Dirty War."  Here are some highlights:


While praised for his work with the poor, Cardinal Jorge Mario Bergoglio — now Pope Francis — has long been dogged by accusations of his role during Argentina’s military dictatorship. We speak to Horacio Verbitsky, a leading Argentine journalist who exposed Francis’ connection to the abduction of two Jesuit priests. Verbitsky is an investigative journalist for the newspaper Página/12, or Page/12, and head of the Center for Legal and Social Studies, an Argentine human rights organization

Horacio Verbitsky, who has written extensively about the career of Cardinal Bergoglio and his actions during the military dictatorship that ruled Argentina from 1976 to 1983. During that time, up to 30,000 people were kidnapped and killed. A 2005 lawsuit accused Jorge Bergoglio of being connected to the 1976 kidnappings of two Jesuit priests, Orlando Yorio and Francisco Jalics. The lawsuit was filed after the publication of Verbitsky’s book, The Silence: From Paul VI to Bergoglio: The Secret Relations Between the Church and the ESMA. ESMA refers to the former navy school that was turned into a detention center where people were tortured by the military dictatorship. The new pope has denied the charges. He twice invoked his right under Argentine law to refuse to appear in open court to testify about the allegations. When he eventually did testify in 2010, human rights activists characterized his answers as evasive.

But when the military coup overthrow the Isabel Perón government, he was in touch with the military that ousted this government and asked the Jesuits to stop their social work. And when they refused to do it, he stopped protecting them, and he let the military know that they were not more inside the protection of the Jesuits’ company, and they were kidnapped. And they accuse him for this deed. He denies this. He said to me that he tried to get them free, that he talked with the former dictator, Videla, and with former dictator Massera to have them freed.


And during a long period, I heard two versions: the version of the two kidnapped priests that were released after six months of torture and captivity, and the version of Bergoglio.

I found documents in the archive of the foreign relations minister in Argentina, which, from my understanding, gave an end to the debate and show the double standard that Bergoglio used. The first document is a note in which Bergoglio asked the ministry to—the renewal of the passport of one of these two Jesuits that, after his releasing, was living in Germany, asking that the passport was renewed without necessity of this priest coming back to Argentina. The second document is a note from the officer that received the petition recommending to his superior, the minister, the refusal of the renewal of the passport. And the third document is a note from the same officer telling that these priests have links with subversion—that was the name that the military gave to all the people involved in opposition to the government, political or armed opposition to the military—and that he was jailed in the mechanics school of the navy, and saying that this information was provided to the officer by Father Jorge Mario Bergoglio, provincial superior of the Jesuit company. This means, to my understanding, a double standard. He asked the passport given to the priest in a formal note with his signature, but under the table he said the opposite and repeated the accusations that produced the kidnapping of these priests.

[The two priests] They were tortured. They were interrogated. One of the interrogators had externally knowings about theological questions, that induced one of them, Orlando Yorio, to think that their own provincial, Bergoglio, had been involved in this interrogatory.

There's much more that deserves a full read.  The sad truth is that the Church has often sided with cruel and repressive regimes when it has been thought that such alliances with evil would protect the Church's wealth and power.  Wealth and power are at the end of the day the Church hierarchy's true god.