Justly Deserved Criticism of the Catholic Church and Francis I 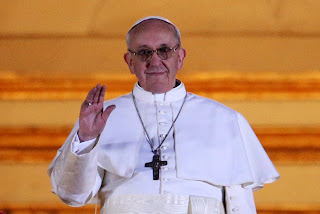 One blogger is unhappy that this blog has been critical of the election of Argentine Cardinal Jorge Mario Bergoglio, now Pope Francis I, as the new leader of the Roman Catholic Church:

Argentine Cardinal Jorge Mario Bergoglio, now Pope Francis I hadn't been the newly elected Pope an hour when LGBT bloggers, groups and other self-appointed important voices were attacking him.

This continuing attack against the Roman Catholic Church, of which this writer is not a member, is getting almost as old as the Church itself . . . There is a very simple solution for the detractors to follow.  Leave the Church if you can't abide by its rules of Faith.  No one presuming you're an adult forces you to be Roman Catholic. Find another Faith, more progressive to you're liking.

Those not of the Faith, particularly the Atheist faggots just need to stifle.


Meanwhile, events continue to demonstrate the true face of the Catholic hierarchy and its moral bankruptcy - including one of the electors of Francis I.  Yes, the Los Angeles archdiocese is paying out another $10 million to victims of sexual abuse - on top of the $600 million previously paid out.  Here are highlights from USA Today:

The Archdiocese of Los Angeles has agreed to pay four men almost $10 million to settle allegations of sexual abuse by a former priest who more than a quarter century ago had confessed to molesting children, attorneys said Tuesday.  Two brothers will receive $4 million each, and the other two men will get nearly $1 million apiece, said John Manly, a plaintiff's attorney.

The settlement is the first since the Catholic Church released thousands of internal records detailing the actions of the defrocked priest, Michael Baker, and how church officials responded. Baker was convicted in 2007 of child molestation and paroled in 2011.

In January, as the files were about to be made public, a California judge ordered the archdiocese to identify all priests and church officials named in the documents.

Mahony retired as Los Angeles archbishop in 2011. Last month, his successor, Archbishop Jose Gomez, stripped him of his official duties.  Mahony is in Rome participating in the conclave selecting the next pope. He was aware of the settlement, J. Michael Hennigan, an archdiocese attorney, told the Associated Press.

Another plaintiff attorney, Vince Finaldi, told the Los Angeles Times that he believed that the release of the files was a major factor in the settlement.  "Once we got the files it confirmed everything we had argued for years and years," Finaldi said. "Cardinal Mahony's fingerprints were all over the case."

If Francis I cleans house and strips men like Mahony and Cardinal Bernard Law and many others of their titles and plush retirements and stops inciting hatred towards gays now that he's pope, I may reconsider my criticisms.  Frankly, I do not expect any meaningful change to occur, so my criticism will stand.  The days of special rights, deference and respect for the Catholic Church need to end.