What Role Jorge Bergoglio(Pope Francis I) Play in Argentina's "Dirty War" and the Murder of Thousands? 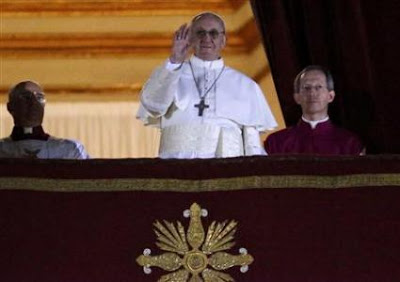 The college of cardinals sure know how to pick popes of late.  The last go round that brought us Pope Benedict XVI, a former Hitler Youth who seemed to continue a fascist mentality to the throne of St. Peter.  Now, by selecting Cardinal Jorge Mario Bergoglio as the replacement for Benedict XVI, the cardinals have again selected a man with some possibly ugly ties to a dictatorial regime credited with kidnappings and the murder of possibly thousands of Argentine citizens deemed to be "subversives."  The Guardian, Reuters, and NPR all have some coverage that raises very serious questions about Bergioglio's complicity and cooperation with the military dictatorship that brutally ruled  Argentina from 1976 to 1983 when democracy and free elections were restored.   During the dictatorship's rule it closed the Congress, removed the members of the Supreme Court, and banned political parties, unions, student unions, etc.  You get the idea.  First these highlights from The Guardian which ironically were published two years ago:

To the judicious and fair-minded outsider it has been clear for years that the upper reaches of the Argentinian church contained many "lost sheep in the wilderness", men who had communed and supported the unspeakably brutal western-supported military dictatorship that seized power in that country in 1976 and battened on it for years. Not only did the generals slaughter thousands unjustly, often dropping them out of aeroplanes over the River Plate and selling off their orphan children to the highest bidder, they also murdered at least two bishops and many priests. Yet even the execution of other men of the cloth did nothing to shake the support of senior clerics, including representatives of the Holy See, for the criminality of their leader General Jorge Rafael Videla and his minions.

As it happens, in the week before Christmas [2011] in the city of Córdoba Videla and some of his military and police cohorts were convicted by their country's courts of the murder of 31 people between April and October 1976, a small fraction of the killings they were responsible for. The convictions brought life sentences for some of the military. These were not to be served, as has often been the case in Argentina and neighboring Chile, in comfy armed forces retirement homes but in common prisons.

What one did not hear from any senior member of the Argentinian hierarchy was any expression of regret for the church's collaboration and in these crimes. The extent of the church's complicity in the dark deeds was excellently set out by Horacio Verbitsky, one of Argentina's most notable journalists, in his book El Silencio (Silence). He recounts how the Argentinian navy with the connivance of Cardinal Jorge Bergoglio, now the Jesuit archbishop of Buenos Aires, hid from a visiting delegation of the Inter-American Human Rights Commission the dictatorship's political prisoners. Bergoglio was hiding them in nothing less than his holiday home in an island called El Silencio in the River Plate. The most shaming thing for the church is that in such circumstances Bergoglio's name was allowed to go forward in the ballot to chose the successor of John Paul II.

A Reuters piece has these passages:

Bergoglio's career coincided with the bloody 1976-1983 military dictatorship, during which up to 30,000 suspected leftists were kidnapped and killed -- which prompted sharp questions about his role.
The most well-known episode relates to the abduction of two Jesuits whom the military government secretly jailed for their work in poor neighborhoods.

According to "The Silence," a book written by journalist Horacio Verbitsky, Bergoglio withdrew his order's protection of the two men after they refused to quit visiting the slums, which ultimately paved the way for their capture.

Verbitsky's book is based on statements by Orlando Yorio, one of the kidnapped Jesuits, before he died of natural causes in 2000. Both of the abducted clergymen suffered five months of imprisonment.

"History condemns him. It shows him to be opposed to all innovation in the Church and above all, during the dictatorship, it shows he was very cozy with the military," Fortunato Mallimacci, the former dean of social sciences at the Universidad de Buenos Aires, once said.

His actions during this period strained his relations with many brother Jesuits around the world, who tend to be more politically liberal.

And then there are these highlights from an NPR story:

His preference to remain in the wings, however, has been challenged by rights activists seeking answers about church actions during the dictatorship after the 1976 coup, often known as Argentina's "Dirty War."

Many Argentines remain angry over the church's acknowledged failure to openly confront a regime that was kidnapping and killing thousands of people as it sought to eliminate "subversive elements" in society. It's one reason why more than two-thirds of Argentines describe themselves as Catholic, but fewer than 10 percent regularly attend Mass.

Under Bergoglio's leadership, Argentina's bishops issued a collective apology in October 2012 for the church's failures to protect its flock. But the statement blamed the era's violence in roughly equal measure on both the junta and its enemies.

"Bergoglio has been very critical of human rights violations during the dictatorship, but he has always also criticized the leftist guerrillas. He doesn't forget that side," said the biographer Rubin.
The statements came far too late for some activists, who accused Bergoglio of being more concerned about the church's image than about aiding the many human rights investigations into the junta era.

[R]ights attorney Bregman said Bergoglio's own statements proved church officials knew from early on that the junta was torturing and killing its citizens, and yet publicly endorsed the dictators.  "The dictatorship could not have operated this way without this key support," she said.

Bergoglio also was accused of turning his back on a family that lost five relatives to state terror, including a young woman who was five months' pregnant before she was kidnapped and killed in 1977. The De la Cuadra family appealed to the leader of the Jesuits in Rome, who urged Bergoglio to help them; Bergoglio then assigned a monsignor to the case. Months passed before the monsignor came back with a written note from a colonel: The woman had given birth in captivity to a girl who was given to a family "too important" for the adoption to be reversed.

Despite this written evidence in a case he was personally involved with, Bergoglio testified in 2010 that he didn't know about any stolen babies until well after the dictatorship was over.

The new pope may like to put forth a simple and humble facade, but these reports raise serious questions about his true morality - or lack thereof.    Personally, the selection of Bergoglio as the new pope seems only too appropriate for an institution that has orchestrated a worldwide criminal conspiracy to protect sexual predators and avoid paying just compensation to victims of sexual abuse by priests.  Morally bankrupt is the term that first springs to mind.   Thus my question remains: how can moral and decent individuals remain members of the Catholic Church.