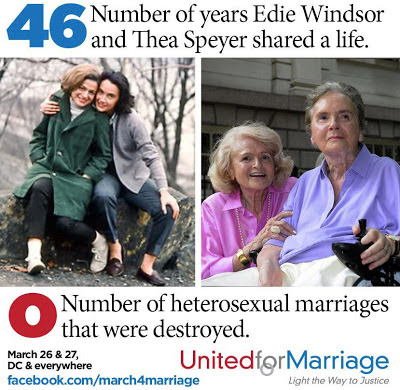 One of the cruel myths disseminated by the enemies of LGBT rights and gay marriage in particular is that gays are little better than promiscuous sluts who are incapable of forming enduring monogamous relationships.  Like so many other things the "godly Christians" say about us, it is a lie.  But then, no one lies more than these self-anointed Christianist bigots.  The image above represents part of the effort to set the record straight with the larger public.  What is ironic to me is that among the boyfriend's and my personal circle of friends is that the majority are in committed relationships, a number of which have endured for more than 30 years.

Do your bit of activism by living your life out and proud and by standing by your partner as your life partner for the world to see.  Recently, the boyfriend and I were announced as a couple as new members of the Hampton Yacht Club.  And guess what, as best I can tell, no one in that less than flaming liberal organization batted an eye.  Help change minds and hearts by refusing to hide any longer.
Posted by Michael-in-Norfolk at Thursday, March 14, 2013