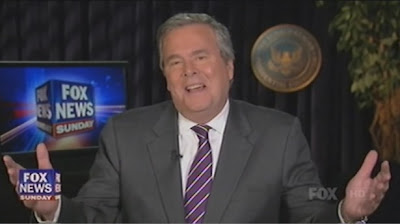 The saying used to be that of the Bush brothers, Jeb Bush was the smart brother and George W. was - well we all fond out what the Chimperator was and "smart" wasn't one of the descriptions that appropriately attached to him.  Cretin, religious nut case on a crusade, war criminal, etc., etc., yes, but never ever smart.  Now, Jeb Bush is proving that perhaps he is just as stupid as his brother after all.  How?  He is claiming that should he run for president in 2016, he will not be hobbled by any negative baggage from his brother's disastrous regime.  Never mind that current a number of presidential historians are ranking George W. Bush as one of the worse presidents in the history of the country.  And never mind that the Chimperator knowingly took America to war in Iraq on false pretenses and  outright lies.  Raw Story looks at Jeb Bush's incredible denail of reality.  Here are highlights:

Former Florida Gov. Jeb Bush (R) is insisting that his famous family name will not hurt him at all if he decides to run for president in 2016.

Fox News host Chris Wallace pointed out to Bush on Sunday that his brother, George W. Bush, had been “somewhat unpopular” when he left office in 2009.

“No,” the former Florida governor replied. “I don’t think there’s any Bush baggage at all. I love my brother, I’m proud of his accomplishments, I love my dad, I am proud to be a Bush.”

“And if I run for president, it’s not because of something in my DNA that compels me to do it. It would be that it’s the right thing to do for my family, that the conditions are right and that I have something to offer.”

According to a 2009 CBS News/New York Times poll, former president George W. Bush left office with an approval rating of 22 percent, the lowest approval since the Gallup began asking the question 70 years earlier.

Given Jeb Bush's apparent total detachment from objective reality, he is obviously the perfect candidate for a party out of touch with reality and a majority of the American electorate.