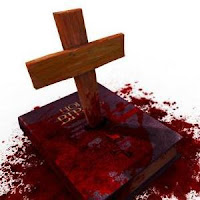 I have long believed that raising a child in a far right Christian home is a form of child abuse.  While adults are free to believe and live their lives as they desire, I have a real problem with children being forced to embrace a form of religion that has at its core a message of embracing ignorance, hate, fear and bigotry.  The children of such homes - and I would most definitely include far right Catholic homes - come out emotionally and psychologically damaged.  My own Catholic upbringing, despite the best intentions of my parents left scars that it took years of therapy to overcome and escape.  A woman in Texas has demonstrated that far right Christianist beliefs can carry physical harm for children as well, especially gay children.  Here are excerpts from a piece in LGBTQ Nation:

FOREST HILL, Texas — A Texas woman is facing felony charges for badly beating her 15-year-old son after she caught him receiving oral sex from a male cousin last December.  Police in Forest Hill have charged Erica Moore with assault with bodily injury to a family member and felony child abuse after she admitted to beating her son with with an electrical cord.

Moore said it is a form of discipline she was taught, and that she “doesn’t believe in homosexuality.”  “My cousin at the time, he was 18. My son, he was 15, and I had walked in the room on [my cousin] giving oral sex to my son and I started whooping my son, and I’m the one who got in trouble as a result of me whooping him,” Moore told KTVT-TV.

“The police department told me that it was consensual, but they was committing a homosexual act in my house and we are totally against that. So I whooped my son, and about three or four months later they came and arrested me for abuse,” she said.

A spokesperson for the Forest Hill Police department said that the incident was brought to their attention after the boy’s grandmother had taken him to a local hospital.  The staff there alerted Texas Child Protective Services who launched an investigation.

Police officials said that Moore’s actions went beyond legally acceptable standards of discipline as she caused bleeding and leaving marks on the boy’s thighs, forearms, hands, torso and back.

[A] spokesperson for Child Protective Services said, “If you are leaving the child with severe injuries or bruises, then obviously we might be talking about abuse.”  A spokesperson for the Tarrant County District Attorney’s Office declined to comment saying that there is still an active investigation into the matter, but did acknowledge that Moore faces prison time if convicted.

Frankly, I hope Moore does prison time.  Beating one's child to the point of hospitalization all because of a belief in the rantings of uneducated nomadic herders of 2,500 years ago.  There is no excuse and it is far past time that the Bible be recognized as a very toxic work that deserves little respect in the modern world.

I hope she does prison time too, it is so justified.