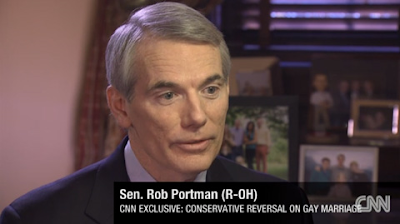 One can just imagine the shrieks and convulsions at NOM and FRC over GOP Senator Bob Portman's announcement that he now supports gay marriage.  An equal heresy is that Portman now appears to also believe that being gay is not a choice and is not something one can change regardless of the snake oil peddled by the "ex-gay for pay" crowd.  What brought about Portman's epiphany?  His college age son came out as gay and, wonderfully, Portman and his wife listened to their son and chose to stand by him rather than kick him to the curb as far to many "godly Christian" parents continue to do with their gay children.  Kudos to Portman.  And kudos to his son for his courage as well.  CNN has details.  Here are highlights:

[Sen. Rob Portman}  .  .  .  .  the prominent Ohio conservative will be known for something else: reversing his hardline position against gay marriage.  He invited CNN to his Senate office to reveal the news.


"I'm announcing today a change of heart on an issue that a lot of people feel strongly about that has to do with gay couples' opportunity to marry," Portman told CNN.

It has to do with another revelation, one deeply personal. His 21-year-old son, Will, is gay.
"I've come to the conclusion that for me, personally, I think this is something that we should allow people to do, to get married, and to have the joy and stability of marriage that I've had for over 26 years. That I want all of my children to have, including our son, who is gay," said Portman.

Will Portman told his father and mother he is gay two years ago, when he was a freshman at Yale University.

"My son came to Jane, my wife, and I, told us that he was gay, and that it was not a choice, and that it's just part of who he is, and that's who he'd been that way for as long as he could remember,
And complete surprise. He told CNN that he never suspected that his son was gay.

What was the Republican senator's reaction?  "Love. Support," responded Portman.  And complete surprise. He told CNN that he never suspected that his son was gay.

Portman says his son, now a junior in college, helped him work through his decision to announce his change in position on gay marriage and blessed the idea of publicly announcing Will Portman's sexuality.

"I think he's happy and, you know, proud that we've come to this point, but he let it be my decision just as you know, it's going to be his decision as to the role he plays going forward in this whole issue," said Portman.

Asked about why he is announcing this change of heart, since his son revealed it to him two years ago, Portman cited two reasons. He just recently became comfortable with his decision to shift his position on gay marriage, and also he said he knew the Supreme Court is considering a pair of gay marriage cases, and reporters would likely ask him for his position.

"I thought it was the right time to let folks know where I stand so there's no confusion, so I would be clear about it," said Portman.

Portman has also authored an op-ed in the Columbus Dispatch entitled "Gay couples also deserve chance to get married."  Here are some excerpts:

I have come to believe that if two people are prepared to make a lifetime commitment to love and care for each other in good times and in bad, the government shouldn’t deny them the opportunity to get married.

That isn’t how I’ve always felt. As a congressman, and more recently as a senator, I opposed marriage for same-sex couples. Then something happened that led me to think through my position in a much deeper way.

Two years ago, my son Will, then a college freshman, told my wife, Jane, and me that he is gay. He said he’d known for some time, and that his sexual orientation wasn’t something he chose; it was simply a part of who he is. Jane and I were proud of him for his honesty and courage. We were surprised to learn he is gay but knew he was still the same person he’d always been. The only difference was that now we had a more complete picture of the son we love.

I wrestled with how to reconcile my Christian faith with my desire for Will to have the same opportunities to pursue happiness and fulfillment as his brother and sister. Ultimately, it came down to the Bible’s overarching themes of love and compassion and my belief that we are all children of God.

British Prime Minister David Cameron has said he supports allowing gay couples to marry because he is a conservative, not in spite of it. I feel the same way. We conservatives believe in personal liberty and minimal government interference in people’s lives. We also consider the family unit to be the fundamental building block of society. We should encourage people to make long-term commitments to each other and build families, so as to foster strong, stable communities and promote personal responsibility.

One way to look at it is that gay couples’ desire to marry doesn't amount to a threat but rather a tribute to marriage, and a potential source of renewed strength for the institution.

Over the past decade, nine states and the District of Columbia have recognized marriage for same-sex couples. It is understandable to feel cautious about making a major change to such an important social institution, but the experience of the past decade shows us that marriage for same-sex couples has not undercut traditional marriage. In fact, over the past 10 years, the national divorce rate has declined.

I’ve changed my mind on the question of marriage for same-sex couples. As we strive as a nation to form a more perfect union, I believe all of our sons and daughters ought to have the same opportunity to experience the joy and stability of marriage.

It is noteworthy to me that Portman focused on God's supposed love for all people.  It's a concept devoid from the mindset of the Christofascists who are best defined by who they hate: virtually everyone but themselves.  Portman still has more evolving to do such as embracing ENDA and protecting LGBT Americans from being fired simply because who they are.  Religious based hate and bigotry have no place in the work place. But at least Portman has begun the journey.