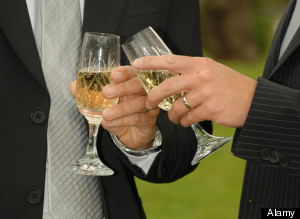 A new Danish study shows significant benefits and lower mortality rates for men in same sex marriages.  Naturally, this will be but one more reason for the Christofascists to ramp up opposition to same sex marriage since, truth be told, they'd prefer that all of us gays experienced early deaths.  But seriously, the study findings show very positive results in addition to increasing family and relationship stability.  Here are highlights from Huffington Post:

Is marriage the key to gay men living longer? According to a new Danish study, the answer is a definite yes.

Published in the International Journal of Epidemiology, the study reportedly examined 6.5 million adults from 1982 to 2011. As the Los Angeles Times points out, the mortality rate for married gay men plummeted during the course of the study, now hovering slightly lower than the rate observed for unmarried or divorced heterosexual men.

"Among men in Denmark, it is more dangerous to be unmarried or divorced than to be married to another man," study researcher Martin Frisch of the Statens Serum Institute in Copenhagen and the Center for Sexology Research of Aalborg University is quoted by Live Science as saying.

In a press release, Frisch added, "It is a novel observation that being married was not always protective. Among persons living alone and persons living in same-sex cohabitation, those who were married to a member of the opposite sex had noticeably higher mortality than unmarried and same-sex married persons."

The study is the first of its kind to examine mortality -- the risk of death during a specific period of time -- and relationship status for an entire nation.

"Our study expands on century-old knowledge that married people generally have lower mortality than unmarried and divorced persons," wrote the lead author, Dr. Morten Frisch, a professor of epidemiology at Aalborg University. "From a public health viewpoint it is important to try and identify those underlying factors and mechanisms."

Researchers found that marriage in and of itself did not ensure low mortality during the period studied. For instance, opposite-sex married couples who lived apart faced a two-fold increase in their mortality rate.

Also, heterosexual men and women saw a steep jump in their mortality rate during the study period if they were married two or more times. The rate increased 27% for women with each successive marriage, and it increased 16% for men.

Surprisingly, researchers found that the risk of death during the study had grown worse for lesbian couples. After dropping for many years, mortality rates had begun to rise slightly, so that they were now higher than those of married gay men and cohabiting heterosexual couples.  "Lesbians may constitute a largely unnoticed high-risk population for suicide and breast cancer," the authors wrote.

It remains unclear precisely why heterosexual married couples have the lowest risk of death during the years studied, although researchers suspect it has to do with income, health care, increased social support and other factors.