The Worst of the Paul Ryan/GOP Budgets 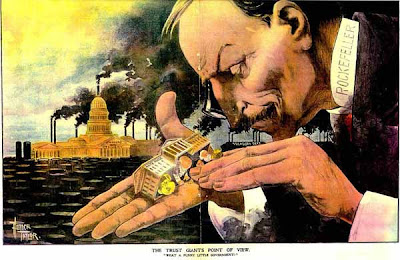 Once again Paul Ryan and the Republican Party have demonstrated that protecting the wealthy while slashing support for the neediest Americans is their priority number one.  Of course, a related GOP theme is slashing government regulation so that rapacious corporations can  - well rape the public.  The Gilded Age and the worse of its abuses and mistreatment of the needy continues to be the "good old days" that the GOP and Ryan seek to restore.  Most of us in this model are disposable trash viewed as hardly even human.  It is disgusting.  It is also the height of hypocrisy for a party that prostitutes itself to far right Christians and claims to honor the Christian message.  The New York Times takes apart the latest Ryan/GOP budget in a main editorial.  Here are excerpts:

Mr. Obama should have no illusions about the core beliefs of some of his Republican dining partners, or their willingness to accept change. That was made clear on Tuesday when the House Budget Committee chairman, Representative Paul Ryan, unveiled his 2014 spending plan: a retread of ideas that voters soundly rejected, made even worse, if possible, by sharper cuts to vital services and more dishonest tax provisions.

The budget, which will surely fly through the House, was quickly praised as “serious” and job-creating by the Senate Republican leader, Mitch McConnell, though it is neither. By cutting $4.6 trillion from spending over the next decade, it would reverse the country’s nascent economic growth, kill millions of real and potential jobs, and deprive those suffering the most of social assistance.

All the tired ideas from 2011 and 2012 are back: eliminating Medicare’s guarantee to retirees by turning it into a voucher plan; dispensing with Medicaid and food stamps by turning them into block grants for states to cut freely; repealing most of the reforms to health care and Wall Street; shrinking beyond recognition the federal role in education, job training, transportation and scientific and medical research. The public opinion of these callous proposals was made clear in the fall election, but Mr. Ryan is too ideologically fervid to have learned that lesson.

The 2014 budget is even worse than that of the previous two years because it attempts to balance the budget in 10 years instead of the previous 20 or more. That would take nondefense discretionary spending down to nearly 2 percent of the economy, the lowest in modern history. And in its laziest section, it sets a goal of slashing the top tax rate for the rich to 25 percent from 39.6 percent, though naturally Mr. Ryan doesn’t explain how this could happen without raising taxes on middle- and lower-income people. (Sound familiar?)

There’s no need, of course, to balance the budget in 10 years or even 20; these dates are arbitrary, designed solely to impress the extreme fiscal conservatives who now compose the core of the Republican Party. That same core in the House will almost certainly reject the 2014 Democratic budget expected from the Senate on Wednesday.


If the Ryan budget is any indication, Mr. Obama’s quest to bring reason to an unreasonable party may be doomed from the outset.